Event to be Shown Nationally on MLB Network and MLB.com

The 2016 MLB All-Star teams will travel through the streets of San Diego in red, white, or blue Chevrolet Silverado and Colorado vehicles on Tuesday, July 12 in the 12th annual MLB All-Star Red Carpet Show presented by Chevrolet. MLB Network will televise the event at 4 p.m. Eastern/1 p.m. Pacific with a simulcast on MLB.com.

The parade, which will begin at Noon Pacific, will start at the Manchester Grand Hyatt Hotel, where players will load into their vehicles, and conclude at Petco Park. Above is the map of the route with full directions at the end of the release.

Serving as Grand Marshals, Trevor Hoffman and Dave Winfield will lead the parade through the streets in Chevrolet Corvettes. The NL and AL All-Star Team Managers, Terry Collins and Ned Yost, will follow Hoffman and Winfield, leading their teams through the streets in Chevrolet Camaro Convertibles. The players will be traveling on a 100% polypropylene carpet that will be recycled after its use.

With the outcome of the All-Star Game presented by MasterCard determining which League will have home field advantage in the World Series, the Commissioner’s Trophy given to the World Series Champion and crafted by Tiffany & Company will be on display as part of the MLB All-Star Red Carpet Show presented by Chevrolet. Merchandise giveaways will take place and Major League Baseball club mascots will be throughout the route to interact with fans.

PARKING & TRANSPORTATION: Parking downtown for both the parade and the All-Star Game will be extremely limited and is expected to sell out early. Fans are strongly encouraged to utilize public transportation. MTS will provide additional special event trolley service. Multiple trolley stations are located within a few blocks of the parade route. Southbound Coaster trains will be departing Oceanside station at 7:42am, 9:43am, 11:08am, and 1:50pm. Free park-and-ride parking lots are located along Trolley and Coaster lines, including more than 5,000 spaces at Qualcomm Stadium.

ROUTE DIRECTIONS: The route for the MLB All-Star Red Carpet Show presented by Chevrolet is as follows: 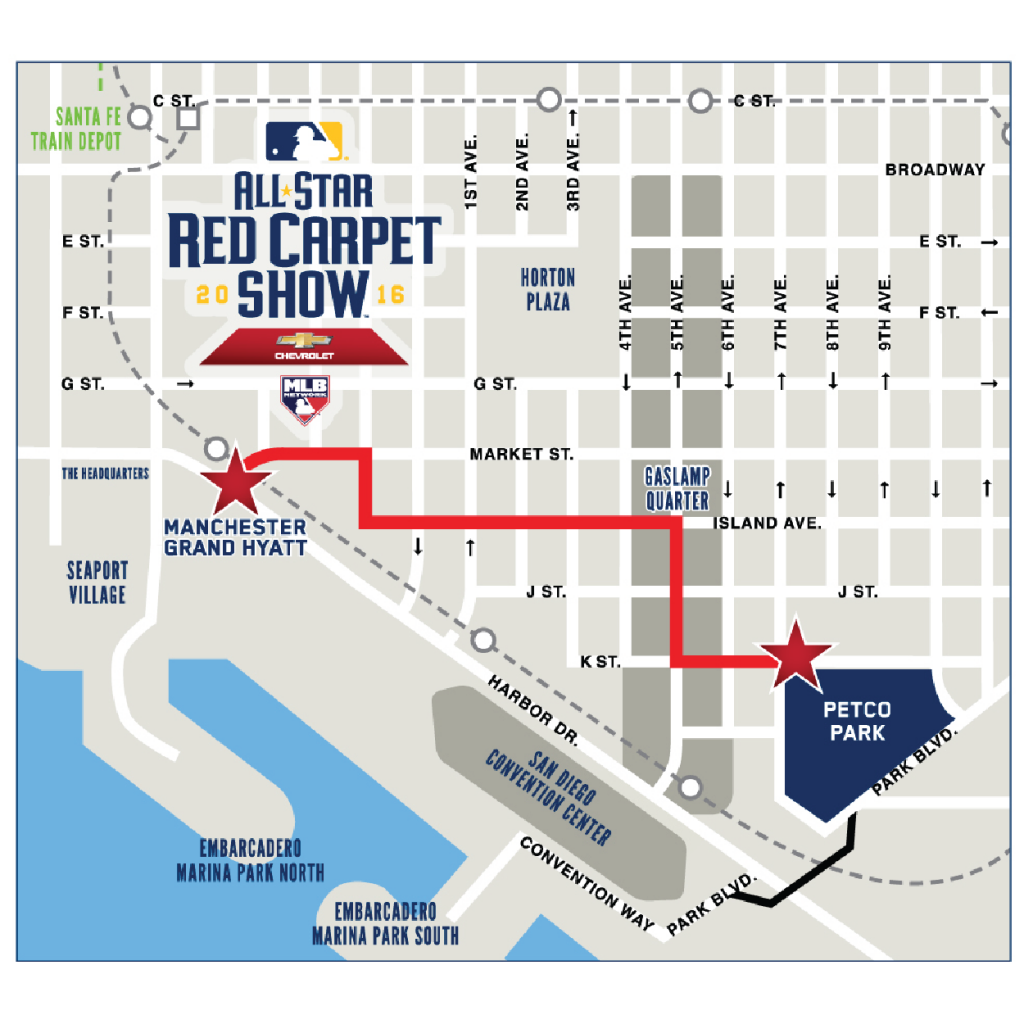