Things to do in the Gaslamp Quarter: February 23-26

Mardi Gras celebrations begin this weekend with the Big Easy Bites & Booze Tour! What are you planning to do in the Gaslamp Quarter? 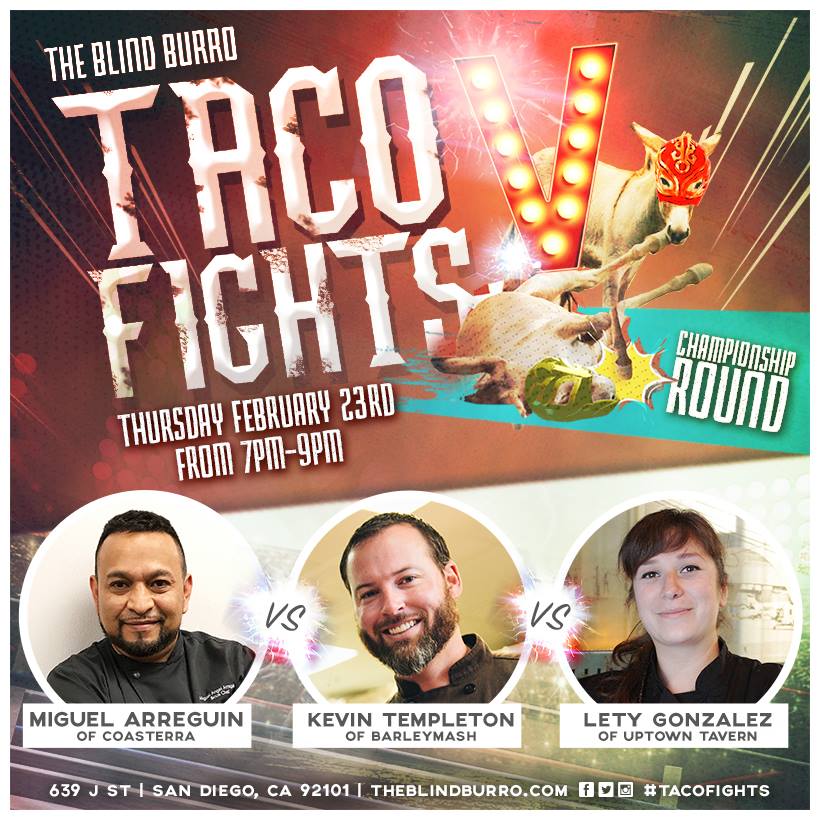 It has all come down to this– The CHAMPIONSHIP Round of #TacoFights is this Thursday, 2/23 at The Blind Burro!

Chef MIGUEL ARREGUIN of Coasterra Restaurant, Chef KEVIN TEMPLETON of barleymash and Chef LETY GONZALEZ of Uptown Tavern will be battling it out for the title of BEST TACO. Try all 3 and vote for your favorite! 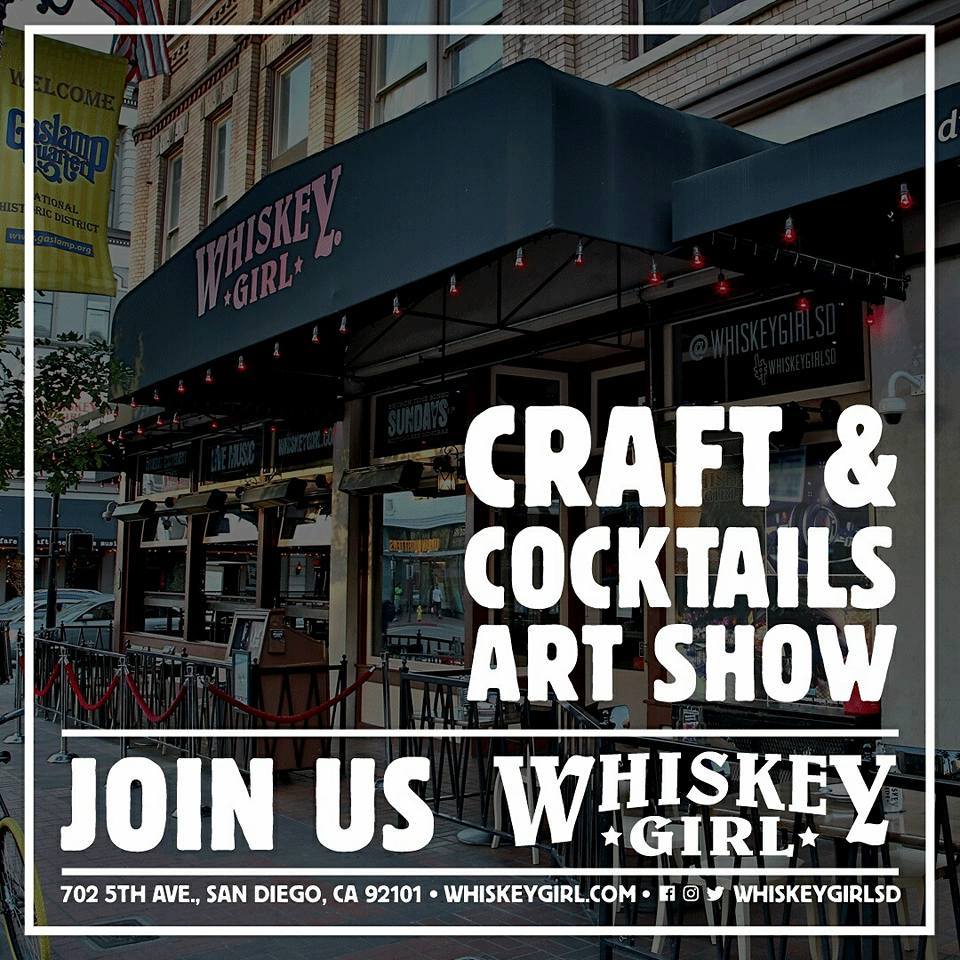 Join us for the Live Gypsy Art Show THIS THURSDAY at Whiskey Girl! 13+ local vendors will be featured, with art available for purchase. 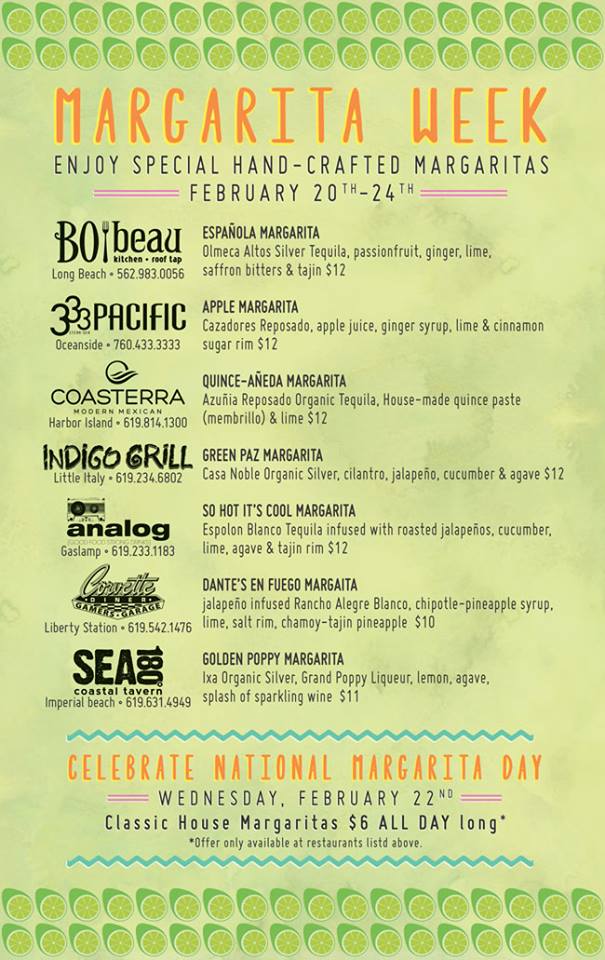 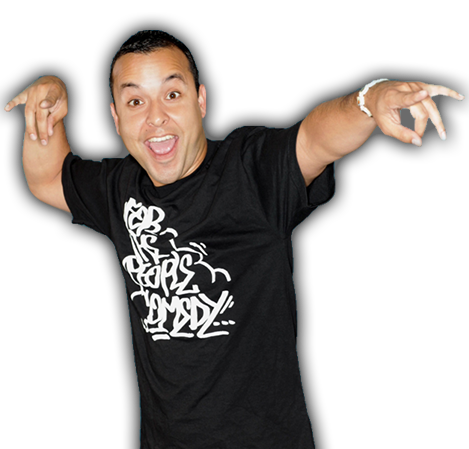 Frankie Quinones brings a performance compared to a one-man variety show. He has performed for our troops overseas in Japan, Europe, and the Middle East and has toured with some of the industry’s most respected headliners including Craig Robinson, Paul Rodriguez, and Eddie Griffin to name a few. He can be seen on Comedy Central, Nickelodeon, Funny Or Die, and SeeSo. Frankie’s repertoire of characters ranges from a hippie woman named Sun Diamond, to Juanita Carmelita, a spicy Latina diva on a budget, to Creeper, a Cholo who has changed his life in a positive direction. 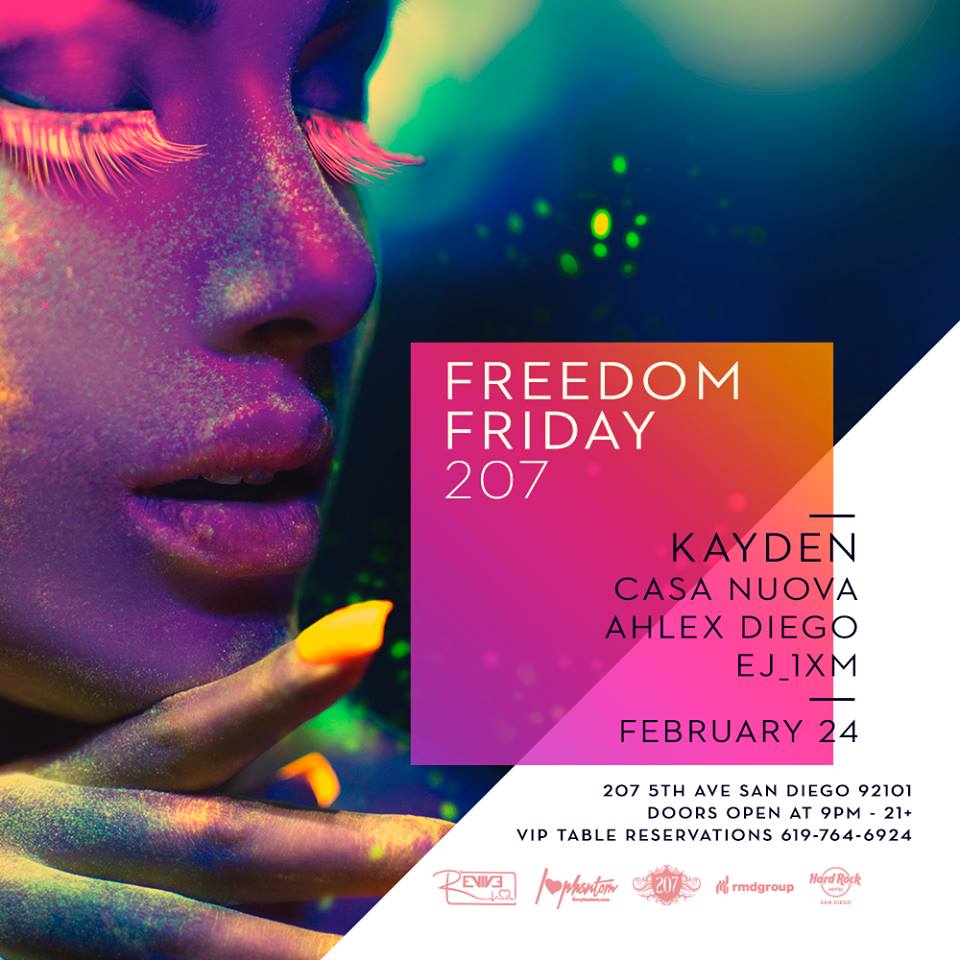 Ladies and Gentlemen, Boys & Girls! We are proud to announce that we will be returning to 207 SD at Hard Rock Hotel San Diego for a one off on FRIDAY FEBRUARY 24TH and everybody is invited for FREE!

Located on the ground floor of the iconic Hard Rock Hotel San Diego, 207 is the ultimate spot to unwind after a long week over local craft beers and premium cocktails! Featuring a massive sound system accompanied by LED walls & LCD screens, 207 SD is the place to be! 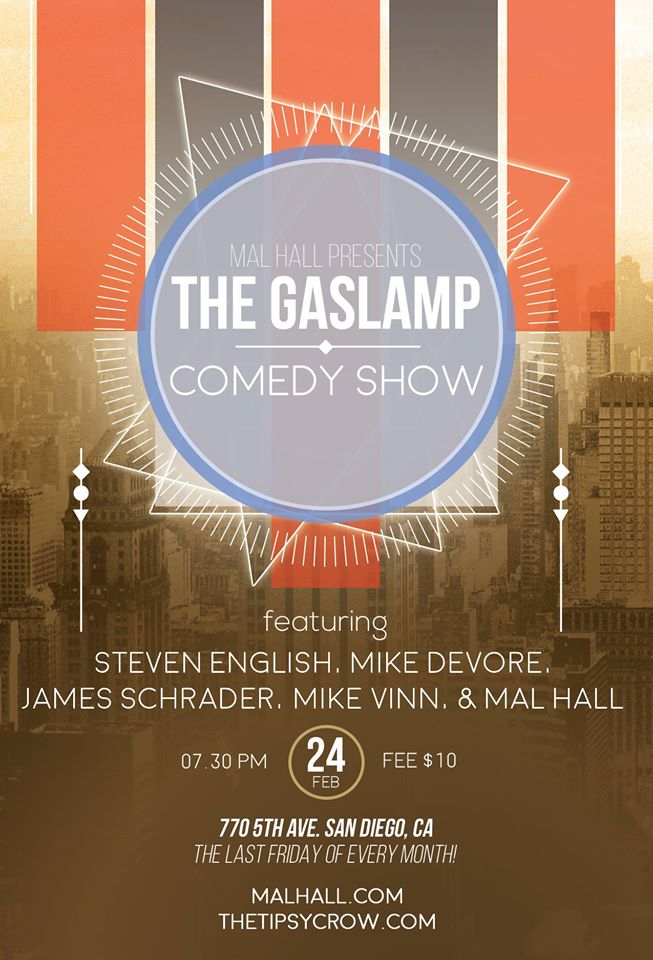 THIS FRIDAY || It’s a SAN DIEGO showcase at the Gaslamp Comedy Show! Mal Hall will be joined by Mike Vinn, Mike Devore, Steven English, and James Schrader for a night full of laughs in the Underground. 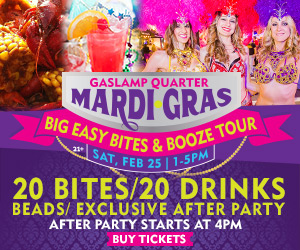 On Saturday, February 25th from 1PM to 5 PM, take to the Gaslamp to indulge in the offerings from 20 hotspots offering Mardi Gras inspired cocktail sips & small plates all while collecting BEADS, BEADS, and more BEADS just in time to deck yourself out for Fat Tuesday.

Tickets for this delicious self guided stroll start at just $25! 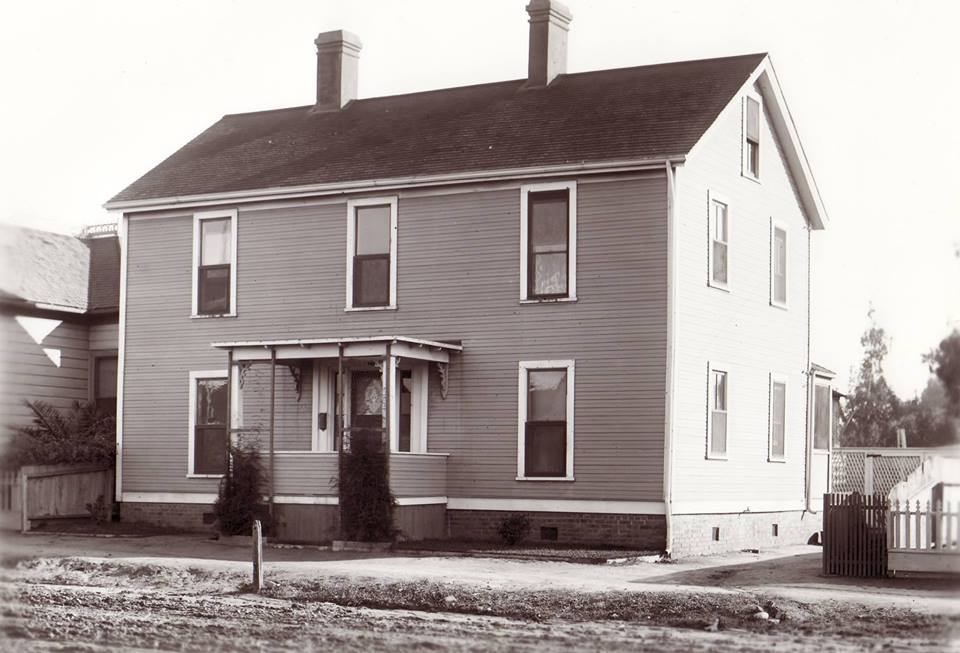 The Davis-Horton House: Alive with Spirits from the Past?  Find out for yourself. Touted by many as, “the most haunted house in the Gaslamp Quarter,” the Davis-Horton House has become a highly popular place for investigating paranormal activities — occurrences that fall outside of what’s considered normal or that can’t be explained scientifically. Paranormal research teams present evidence to support their claims of having made contact with several house spirits. They’ve recorded voices, taken photos, and shot video to document their surprising findings.  These other-worldly experiences are available to the public through monthly Paranormal Investigations tours, led by San Diego Ghost Hunters, a professional paranormal research team that conducts on-site investigations. 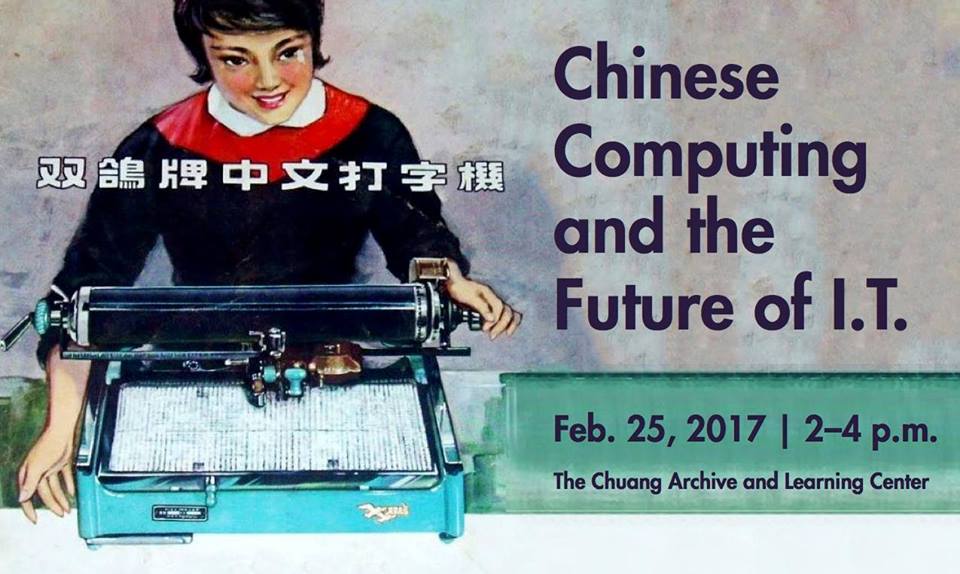 Chinese Computing and the Future of I.T.

Are the 75,000 characters in the Chinese language impediments to the fast-moving nature of modern technology, or are Chinese typists ushering in the future of computing? Award-winning Stanford historian, Dr. Tom Mullaney, will explore these questions through his captivating research of Chinese telegraphs, typewriters and computers. Co-presenter Scott Klemmer, Director of the Design Lab at UC San Diego, will discuss the background of these objects and explain how they relate to language, coding, and the richer ways we communicate and solve problems in the 21st century.

After the presentation, the audience is invited to view the San Diego Chinese Historical Museum’s pioneering exhibit from Dr. Mullaney’s collection of Chinese and Pan-Asian typewriter and I.T. artifacts, Radical Machines: Chinese in the Information Age. 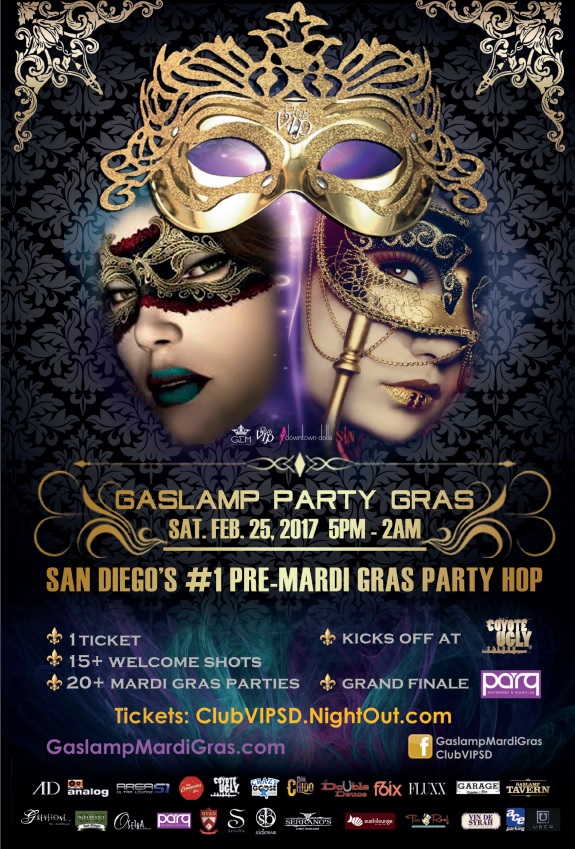 Don’t wait until Fat Tuesday! Join the annual Mardi Gras Party Hop presented by the top nightclubs, restaurants and bars in East Village and the Gaslamp Quarter, for the ultimate weekend kickoff to Mardi Gras!

Festivities begin at 5pm at Coyote Ugly with bar-top dancing, DJ and a welcome shot. From there, attendees will receive their club pass to enjoy no cover and priority admission to 20 other most notable venues all within walking distance from each other. 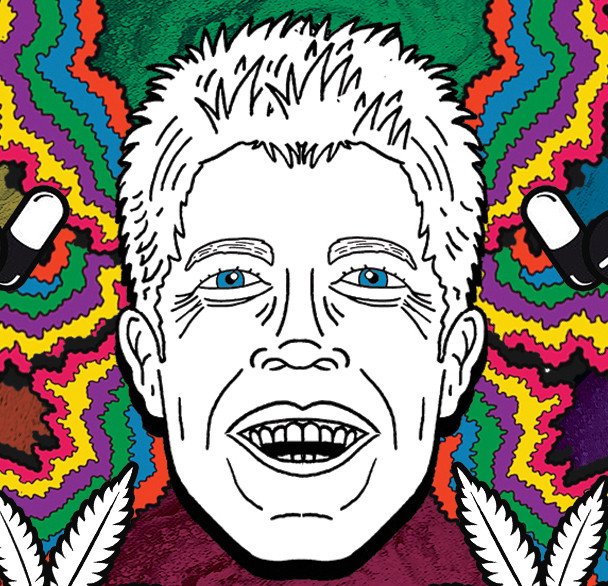 Hi! I’m Shane Mauss. Most comedians write biographies in the third person, but it’s kind of silly. Before I tell you about this show, it’s standard for comedians to gloat about their accomplishments: I’ve been a comedian for twelve years. Nine years ago I won an award for Best Stand-Up at the HBO US Comedy Festival and became a fulltime national (and sometimes international) headliner. Since then I’ve appeared on Jimmy Kimmel, Showtime, five times on Conan, and have specials on Comedy Central and Netflix.
When: Sunday, February 26 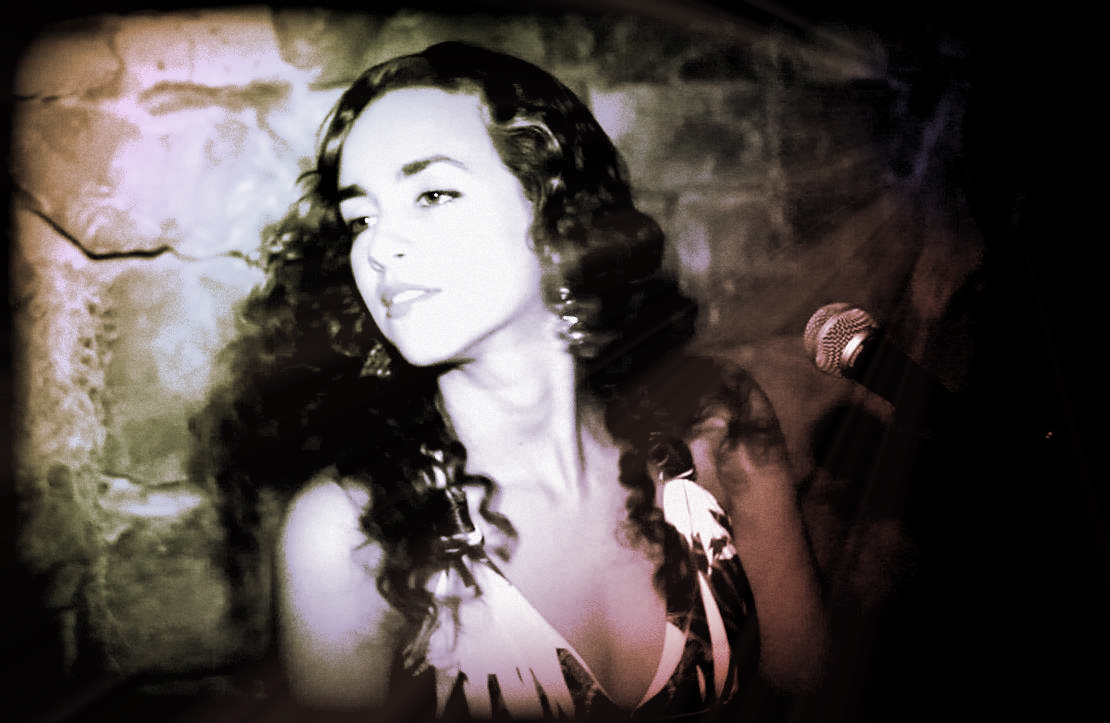