POP Art stars and long-time Coachella Valley society scene-sters, Karen and Tony Barone, will be the guests of honor at Down the Rabbit Hole, an exhibition of sculpture and recent works on canvas and paper premiering at the Chuck Jones Gallery in the heart of San Diego’s Gaslamp Quarter. Opening night reception is Friday, March 17 from 5 to 8 PM. It is free and open to the public. The gallery is located at 232 Fifth Avenue, San Diego. 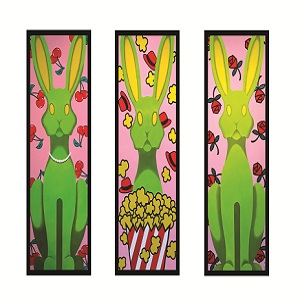 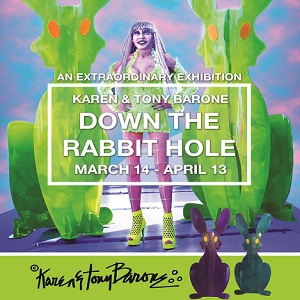 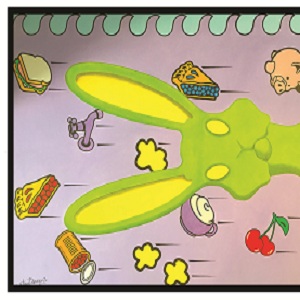 American master POP artists, Karen and Tony Barone, have wowed the art world over the last three decades with their original and inspired take on contemporary culture. Like Chuck Jones, they have their finger firmly planted on the pulse of the Zeitgeist, a rare ability shared only by the greatest contemporary artists.

It is this unique ability to seamlessly meld their point of view with that of Jones’s that inspired them to create a work in homage to the creative force of Chuck Jones. Their unique perspective, already steeped in contemporary society, lends a modern sensibility to this classic, living character. Promptly at 6 PM on Friday, March 17, their most recent painting, Bugs Bunny in a Hair-Raising Experience, will be unveiled at the gallery.

Chuck Jones, a four-time Academy Award recipient and Director’s Guild member, is perhaps best known for being one of the fathers of the iconic cartoon character, Bugs Bunny. His art, the art of the animated film, has been shown in museums around the globe, including the Museum of Modern Art, New York, and the EMP Museum in Seattle. His films have been celebrated at international film festivals including Telluride, Zagreb, and Chicago. He has been the recipient of five honorary doctorates as well as the prestigious MacDowell Colony Medal.

The Chuck Jones Gallery welcomes Karen and Tony Barone to its roster of exceptional historical and contemporary artists. “After meeting Karen and Tony, I walked away with the understanding that they are the ultimate creative team who bring smiles and intrigue to everything they do. They are smart, joyful professionals who put their jubilant spirit into their unique work”, said Craig Kausen, Chuck Jones’s grandson and president of the Chuck Jones Galleries.