The San Diego Padres opening day is this Friday, April 7th! The 2017 Season gets underway on Opening Day Friday, April 7, with first pitch scheduled for 3:40 p.m. Party in the Park presented by Southwest Airlines returns in 2017 with Friday marking the first of the season. Friday’s pregame ceremony will feature all the pageantry of Opening Day including the unfurling of the Holiday Bowl Big Flag, held by 275 Sailors stationed in San Diego. The Ceremonial Bell will be rung by Officer Wade Irwin, partner of fallen San Diego Police officer Jonathan DeGuzman. Friday’s Ceremonial First Pitch will be thrown by Padres Hall of Famer Randy Jones.

Singer Stephany Negrete will perform Friday’s National Anthem. A native of San Diego, Negrete was a semifinalist on the fifteenth and final season of FOX’s hit show American Idol. The Anthem will be followed by a flyover performed by F-35s from Marine Fighter Attack Squadron 211 of 3RD Marine Aircraft Wing. In addition, Information Systems Technician First Class Petty Officer Yarrick Conner of the U.S. Navy will perform God Bless America prior to the 7th inning stretch.

Game two of the Opening Series presented by Sycuan Casino will feature the first Baseball Night in San Diego of the 2017 season as the Padres face the Giants at 5:40 p.m. Saturday’s game will feature a Celebrate San Diego theme, carrying the enthusiasm and energy from the February community rally at Petco Park into the 2017 season. Sunday will serve as Military Opening Day at Petco Park when the Padres take on the Giants at 1:40 p.m.

Opening Day on Friday is sold out, and Saturday is expected to sell out, so fans are encouraged to purchase tickets for Saturday and Sunday in advance. They can be purchased at www.padres.com, at the Advance Ticket Windows at Petco Park and by phone at 619.795.5555.

In addition to all the festivities at Petco Park, Gaslamp Quarter businesses are also offering pregame specials! 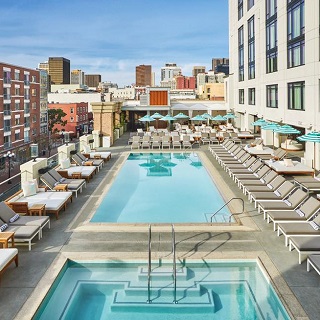 Heading to Opening Day? Join us at Pendry San Diego for a little pregame celebration at The Pool House featuring game day bites and brews from 12-3PM.

Tickets: $55 per person, includes 2 drink tickets and an array of bites 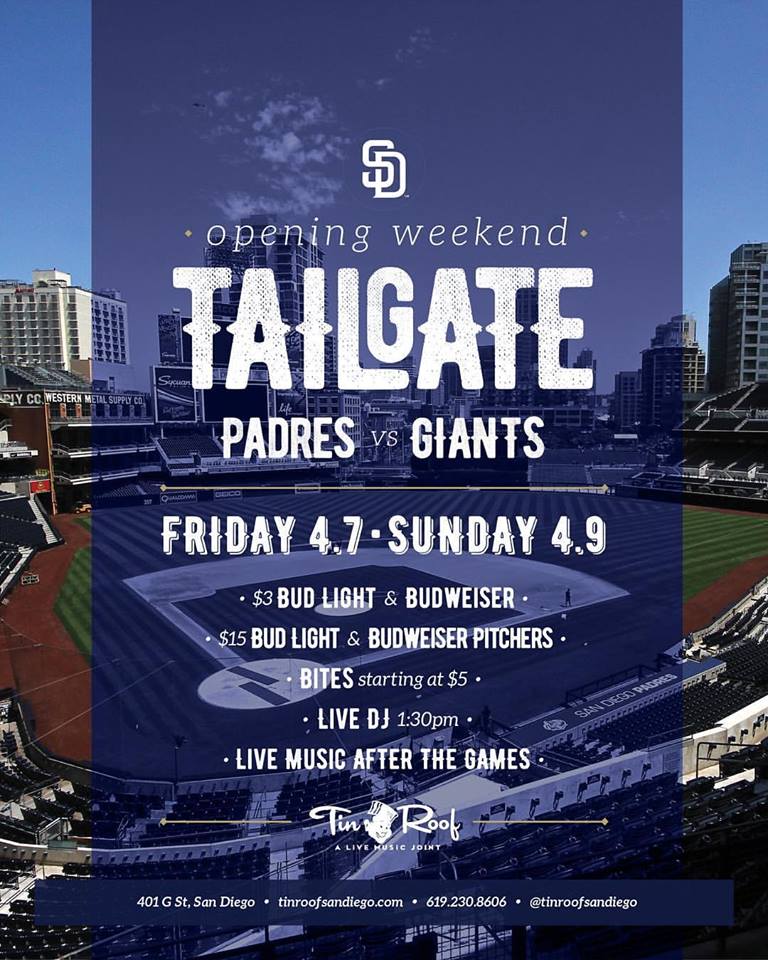 We are celebrating opening day weekend with a Tin Roof Tailgate featuring $3 beers, $5 bites & live music after the games! Help us kick off baseball season at the Roof! 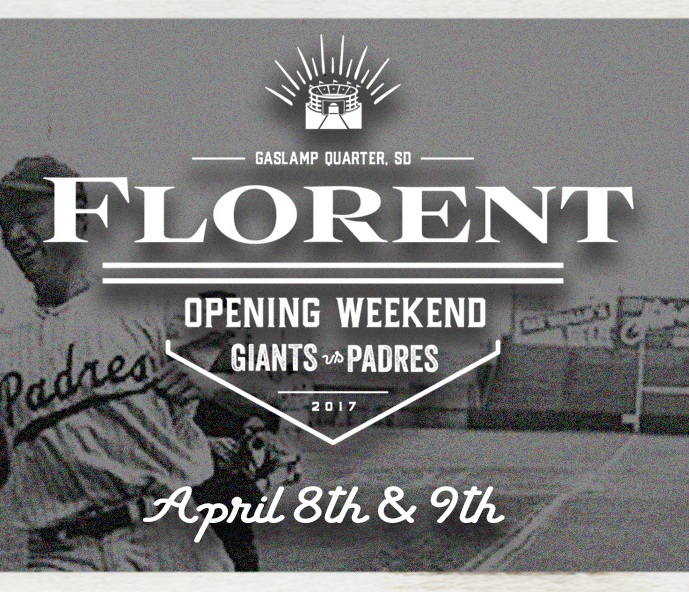 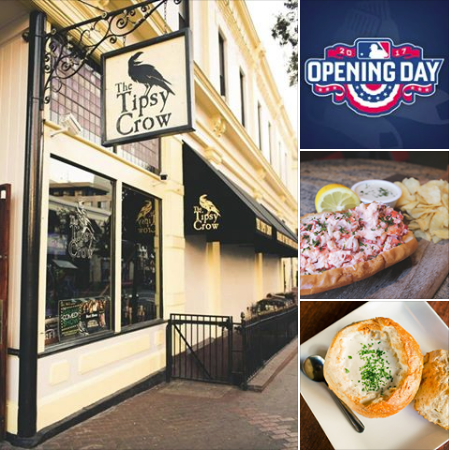 Looking forward to a full season of Red Sox madness at the Tipsy Crow! 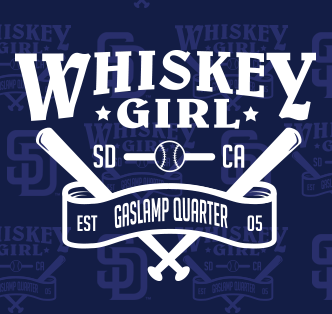 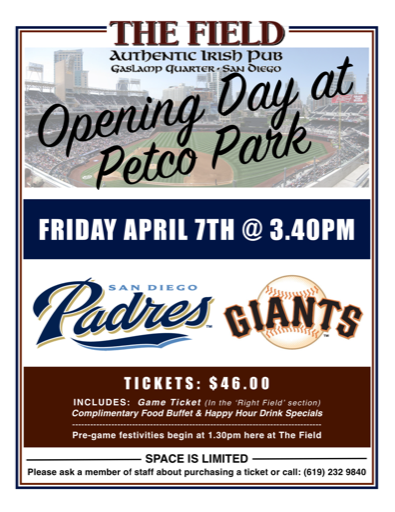 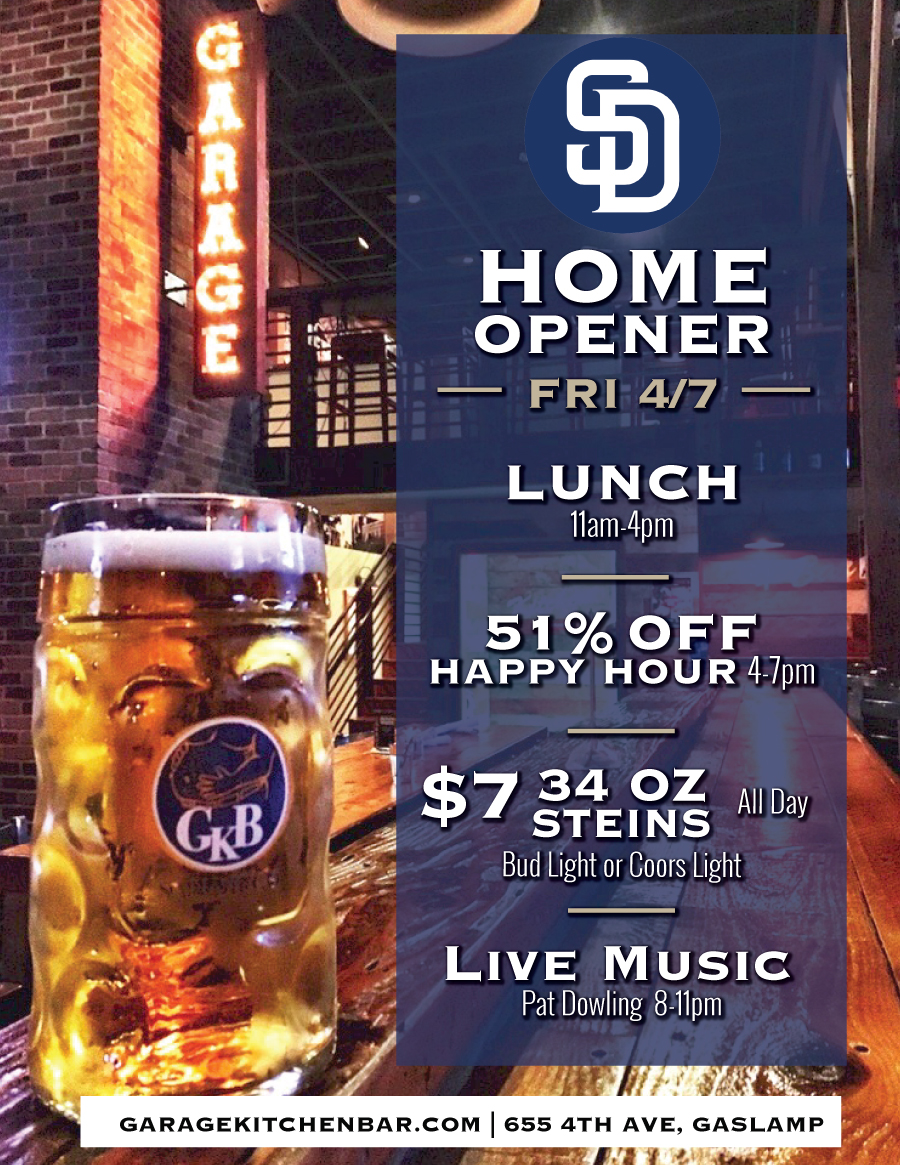 Join us AFTER the game for LIVE MUSIC by Pat Dowling Live.