One of the first artist prospectuses the public arts subcommittee received back in January was for Rebecca Nuvoletta’s “Ordinate” design. The committee was so impressed by the creativity of the medium and the design that was presented and now has come to life.

Rebecca Nuvoletta is from Kodiak Island Alaska. She earned a Bachelors of Music in Vocal Performance and spent 10 years as a classical singer living and studying around the world. When she moved to New York in 2009, her worlds started blending and she found herself focusing more on visual arts. She started art directing events in which music, projection mapping, aerial dancing, and a million new emerging arts, were blended. “It has been a blessing to have moved to San Diego last fall to spend some time immersing myself in the “desert/jungle meets the sea” characteristics of San Diego,” said Nuvoletta, who created an incredible new addition to the “Rabbitville” herd. 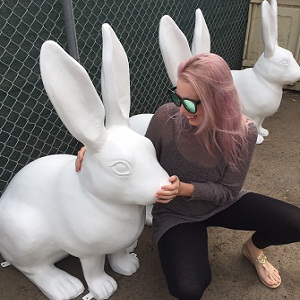 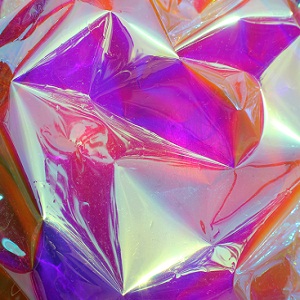 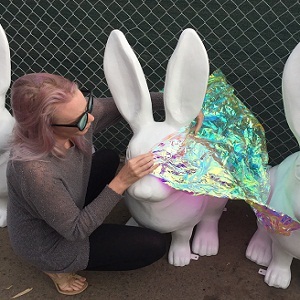 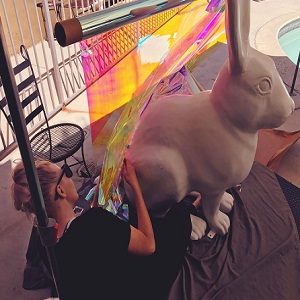 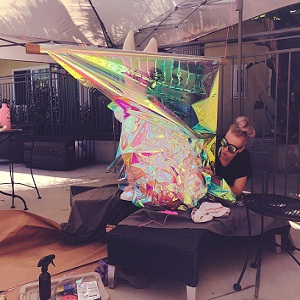 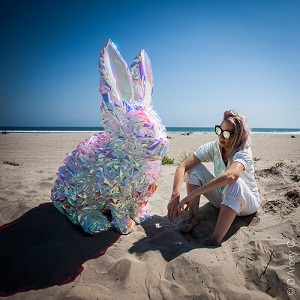 What is the name of your rabbit?

Rebecca: “Ordinate”:  “Ordinate” celebrates the visions of a distant future in the founding of New Town.

Rebecca: The rabbit totem, treated in a prismatic array of color celebrates the moment of decision taken by Alonzo Horton.  His vision to gaze into the future beyond the existing rabbits is memorialized in the fantastical play of future holographic colors.  The sculpture sparkles with San Diego’s signature energy interface of the sun and sea.

What is the medium used that makes “Ordinate” sparkle?

Rebecca:  The material I used  is called Dichroic Polyethylene Tereplthalate (PET) Film and I attached the material with a special adhesive glue.

I attached the PET film in a way that would create a multitude of light reflecting angles.  The film was attached with adhesive in points creating a 3d Delaunay triangulation.  This arrangement captures the light at varying angles causing the pet film to change color based on angle view.

Are you inspired by any particular artists or images?

Rebecca: Leo Villareal is a huge source of inspiration.  His work takes on creating the new future through art and light and is an exciting prospect.  (Villareal is known for his urban light projects in exhibitions all over the world like the Bay Bridge in San Francisco.)

Does “Ordinate” have a superpower?

Rebecca: Yes, if you have a pin light on him, or if he sits  in direct sunlight, he will project light on objects and walls around him.  He really is a superhero!

“Ordinate”  is the second of 15 celebrities that will be on exhibition, at different Gaslamp Quarter patios, in hotel lobby’s, parks, and museums around San Diego,  commemorating the Gaslamp Quarter’s 150th Anniversary.  Thank you Rebecca Nuvoletta for creating such a fascinating piece, and bringing “Ordinate” to life!

Stay tuned for more rabbits to come and eventually a map to where they will be “hopping” to next!