The Hard Rock Hotel will play host in the early part of the evening on the Woodstock Green with hors d’oeuvres stations from Barleymash, Challenge Dairy, Tin Roof, The Melting Pot, Parq Restaurant and Nightclub, Queensborough, Meze Greek Fusion, Henry’s Pub, and newcomer Havana 1920 starting at 5:30PM. As guests enjoy the delicious food, they can bid on exclusive silent auction items, listen to the sultry sounds of “K Emeline and the Fellas,” and vote for their favorite “Dusty Rabbit” 150th Anniversary signature cocktail.

At 7PM guests descend the urban staircase to Fifth Avenue for a three-course, gourmet meal by Cohn Restaurant Group, which has for over 33 years brought San Diego dining to a new level.  The meal will be designed by Executive Chef Samuel Geffroy of Gaslamp Quarter’s own Blue Point Coastal Cuisine. Each property of Cohn Restaurant Group guarantees superior service and aesthetic comfort, providing a premiere dining experience for each guest attending the 150th celebration.  While enjoying the delectable cuisine, guests will be entertained by music of the 18- piece “Big Band Express” orchestra.

“We kicked off the 150th Anniversary celebration with the Mayor’s proclamation in May 2017,” said Gaslamp Quarter Association Executive Director, Michael Trimble. “The Gaslamp 150 Gala is where we will showcase to the world how the community and our member businesses honor our history.” 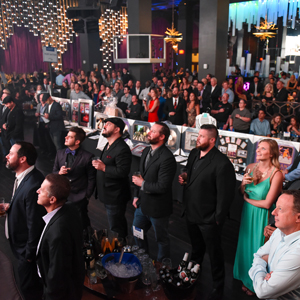 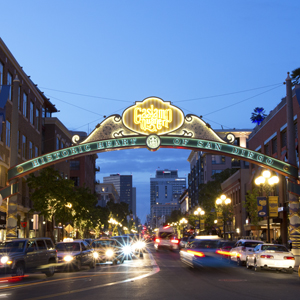 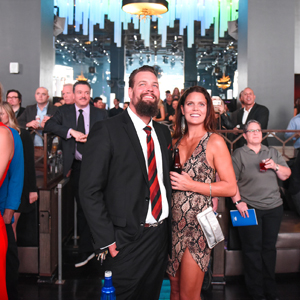 At the event, Mayor Kevin Faulconer and Michael Trimble will be honoring Gaslamp Quarter visionary, and founding President of the Gaslamp Quarter Association, Mr. Tom Hom.  “In the 1970’s this man first had the vision to protect and preserve this historic jewel filled with Victorian-style buildings and stories dating back to 1867!” said Mike Georgopolous, partner of RMD Group and Gaslamp Quarter Association Chairman. Today, Mr. Hom’s vision has come to life in the form of one of the most visited dining and entertainment districts in the world.  Other dignitaries attending the gala include State Senator Toni Atkins, State Assemblymember Todd Gloria, and City of San Diego Councilmember Chis Ward.

These 150th Anniversary tributaries have been hopping around to different exhibitions thanks in part to the local artists who decorated them, and the Downtown Partnership Clean and Safe crew.  Some of the places that the fiberglass sculptures have been on exhibition are, San Diego Comic-Con International, 2017 Fleet Week, San Diego Symphony, and San Diego City Hall.

“People have been following the exhibition around downtown to look for their favorite rabbit!” said Trimble, “These sculptures have been extremely valuable to the 150th campaign and all 15 will be displayed at the Gala!” Nine sculptures have been sponsored by: Pendry San Diego, Coca-Cola, Warner Bros. Television, Hard Rock Hotel San Diego, Pacific Magazine, City of San Diego, San Diego Padres, Ghirardelli Chocolate, and a private donor, John Ramirez. The final six will be showcased at the Gala and put up for auction.  This is the chance to own a piece of the 150th celebration!  The rabbits will be on exhibition to the public until May 24, 2018.

During the live auction there is also an opportunity to bid on a first pitch at a Padres Game, a 16 person suite at Petco, $1000 worth of parking from the 6th and K Parkade, or a  four foot custom oil painting titled, “The Road We Have Walked” painted by Michael J Wolf Gallery headline artist, Pete Tillack.  This painting was created to commemorate the 150th celebration.

After the live auction, guests can enjoy desserts from Sensational Treats, and dancing to the sounds of  “Big Band Express” while taking in the beauty of the famed Gaslamp Quarter. The after party will be at Henry’s Pub, where guests who want to keep the party going can turn in their table ticket for a free drink, and find out the final after party opportunity drawing prize.

The GBOD Group Gaslamp 150 Gala presented by Trilogy Real Estate Management will be raising valuable funds for the Gaslamp Quarter Association. A non-profit 501(c)6 Business Improvement District, founded in 1982, representing more than 400 businesses located in the 16.5 block historic district.  Proceeds from this exciting event will go towards the Gaslamp Quarter Association’s ongoing promotional programs and efforts to enhance and protect this National Historic District.

Sponsorships, tables and tickets are still available until Friday, November 3, at www.gaslamp150gala.com.  This incredible event is not to be missed, and only happens once every 150 years!