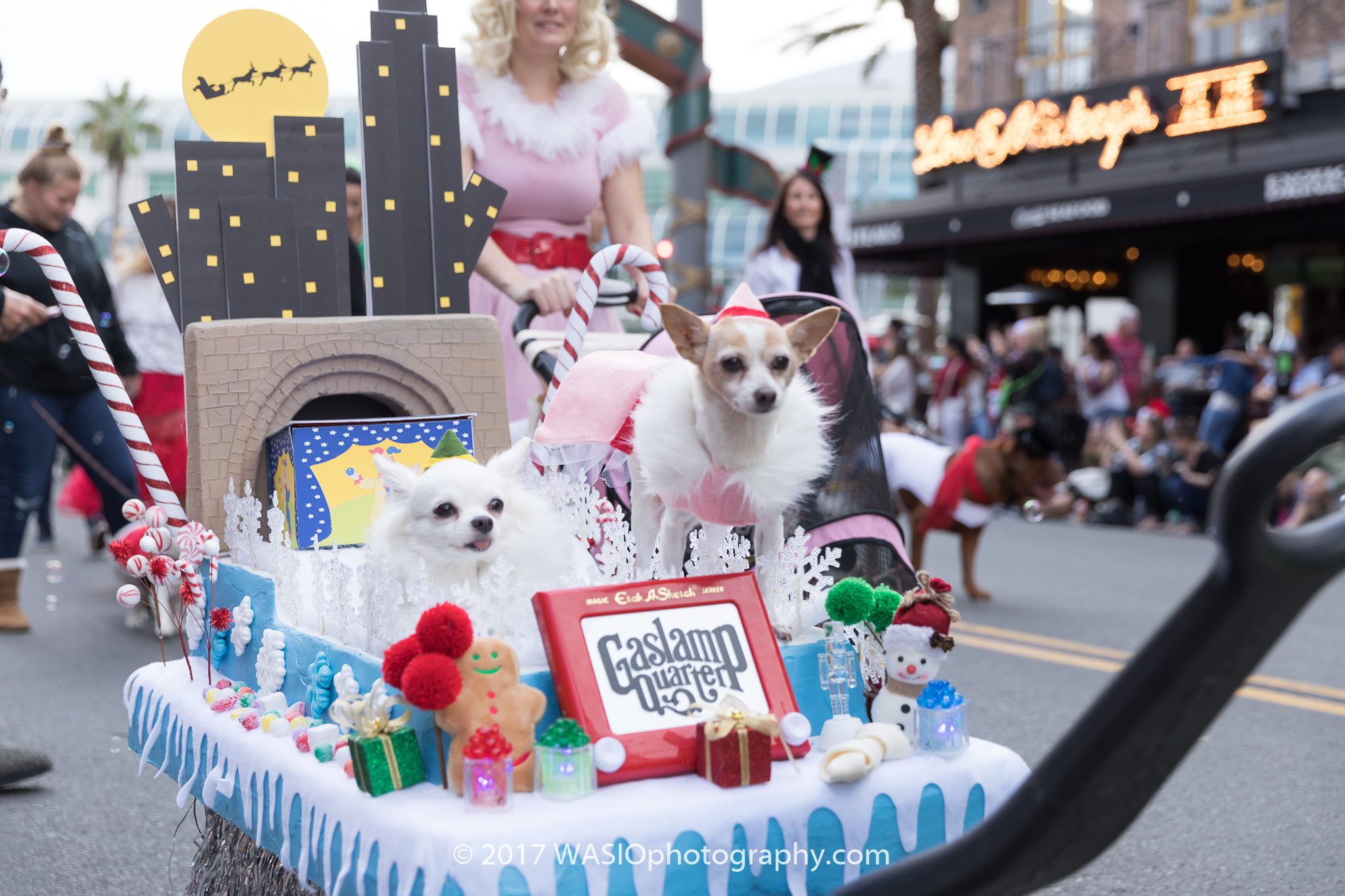 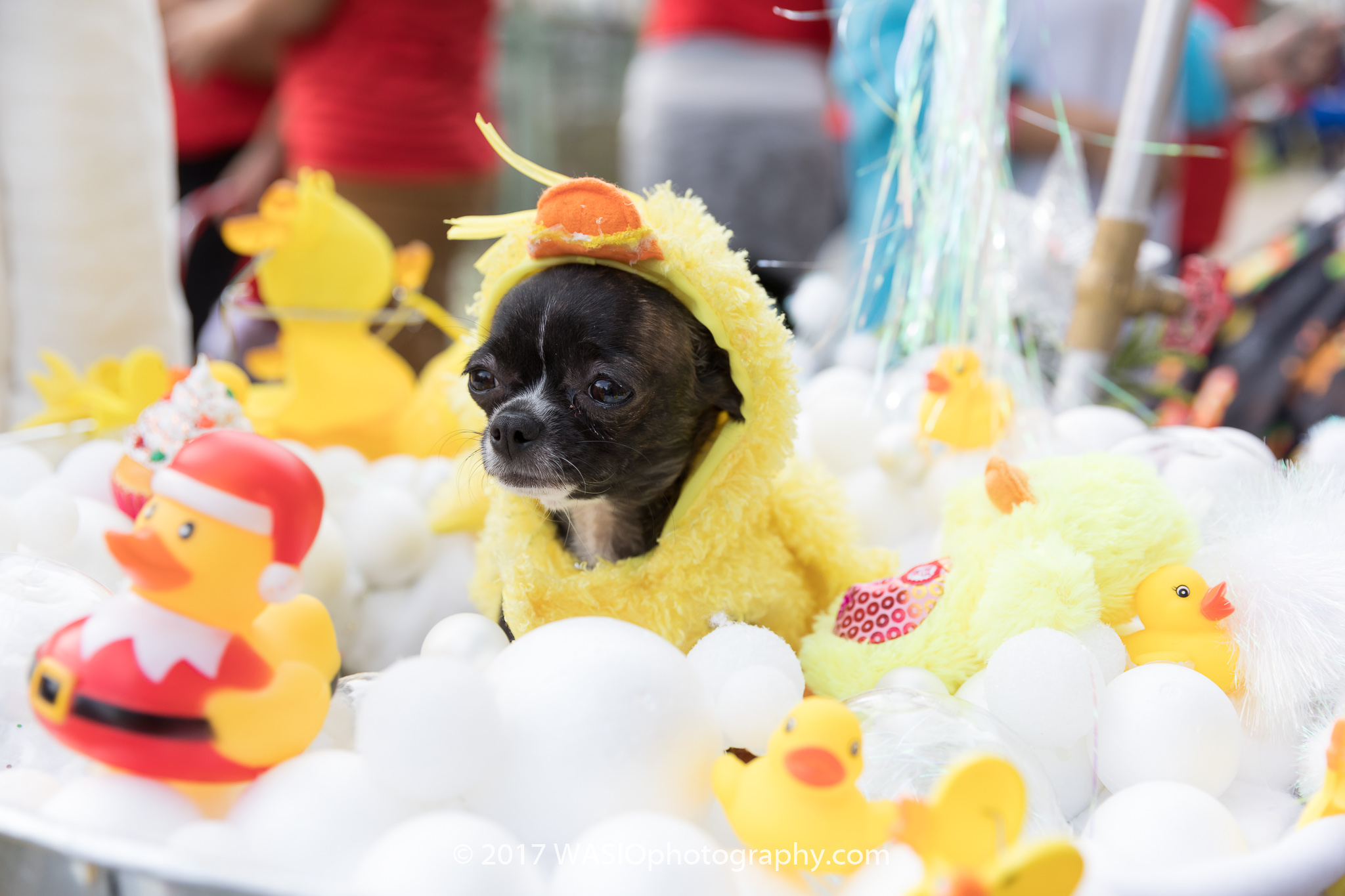 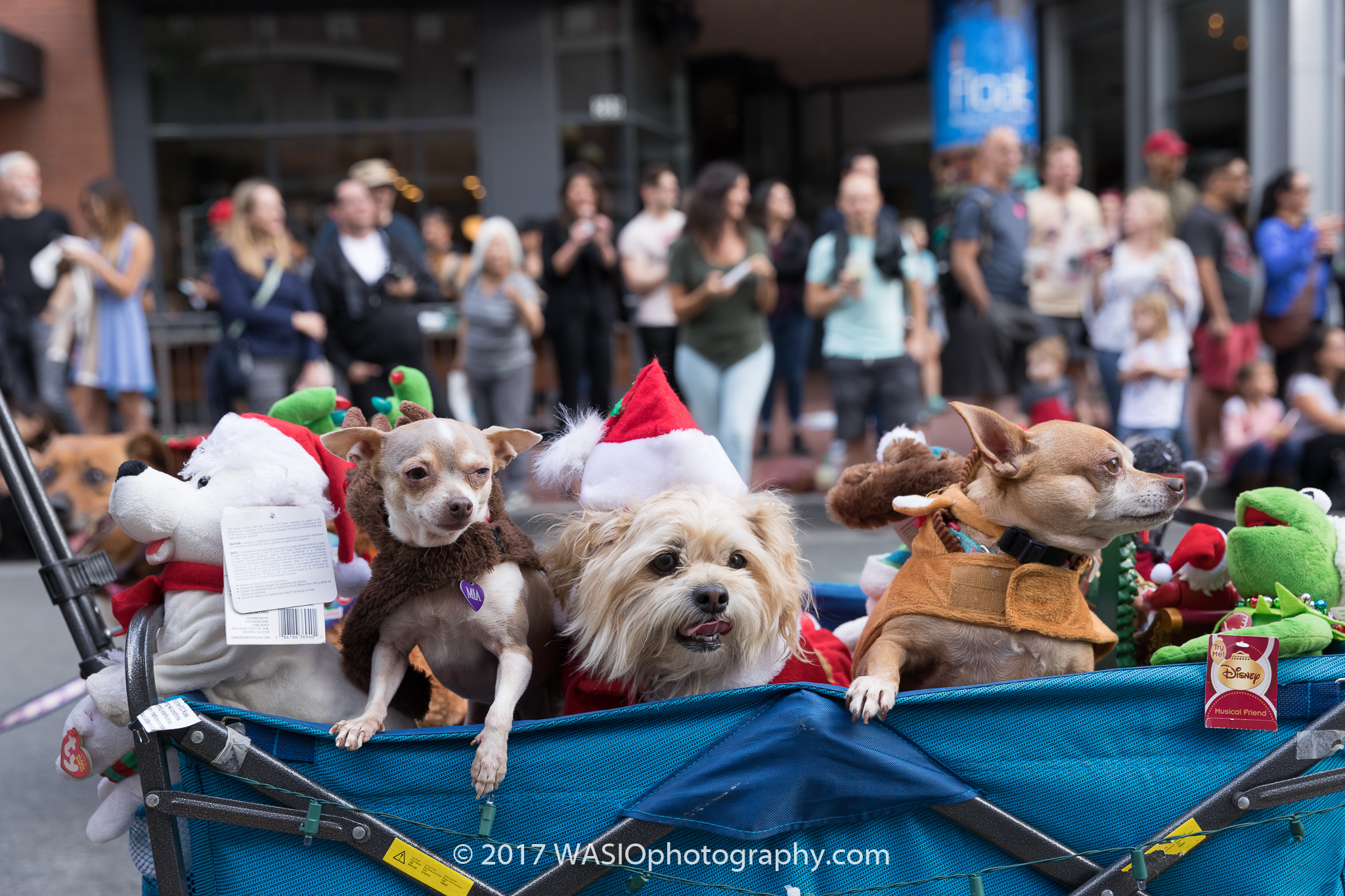 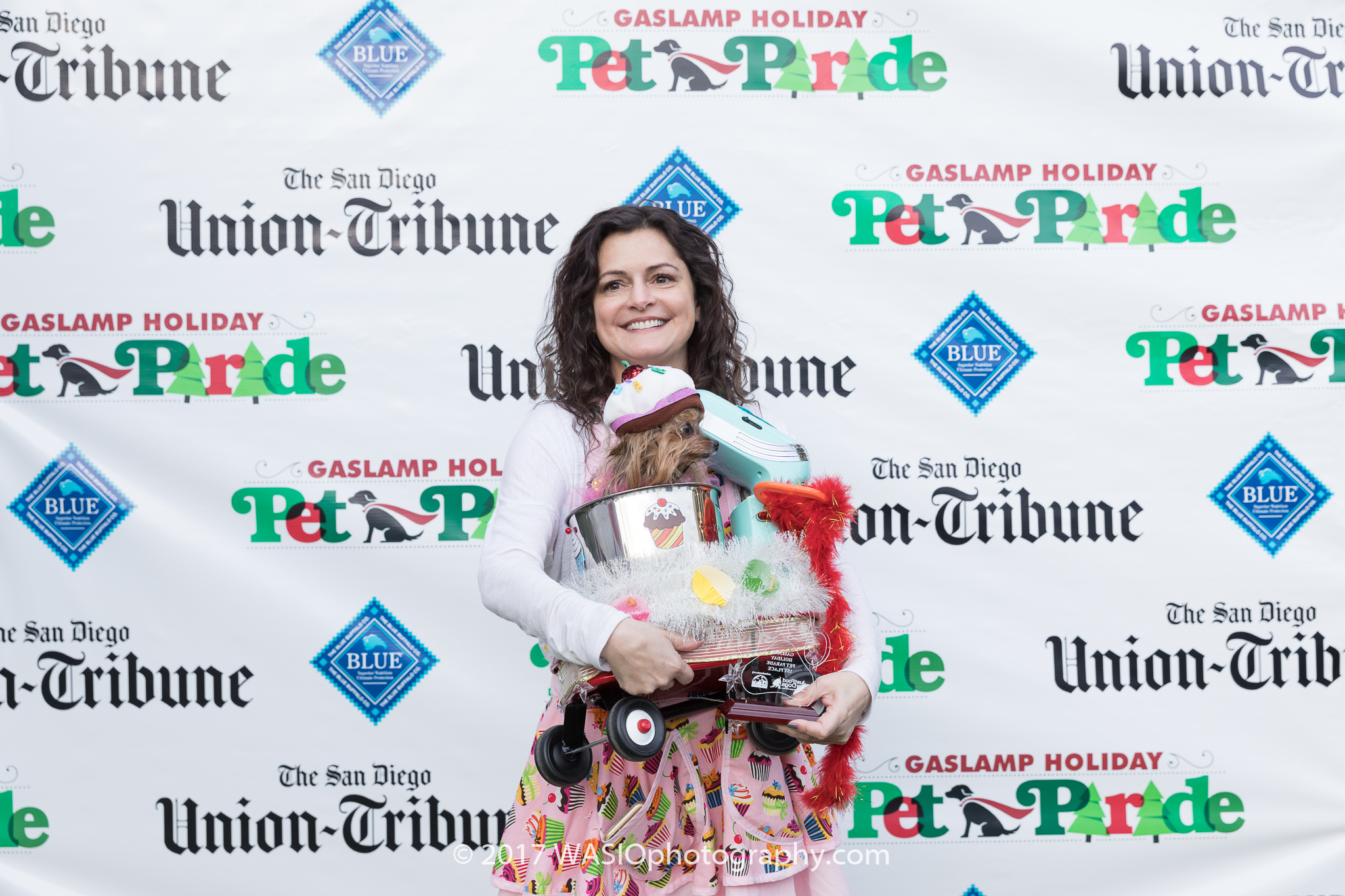 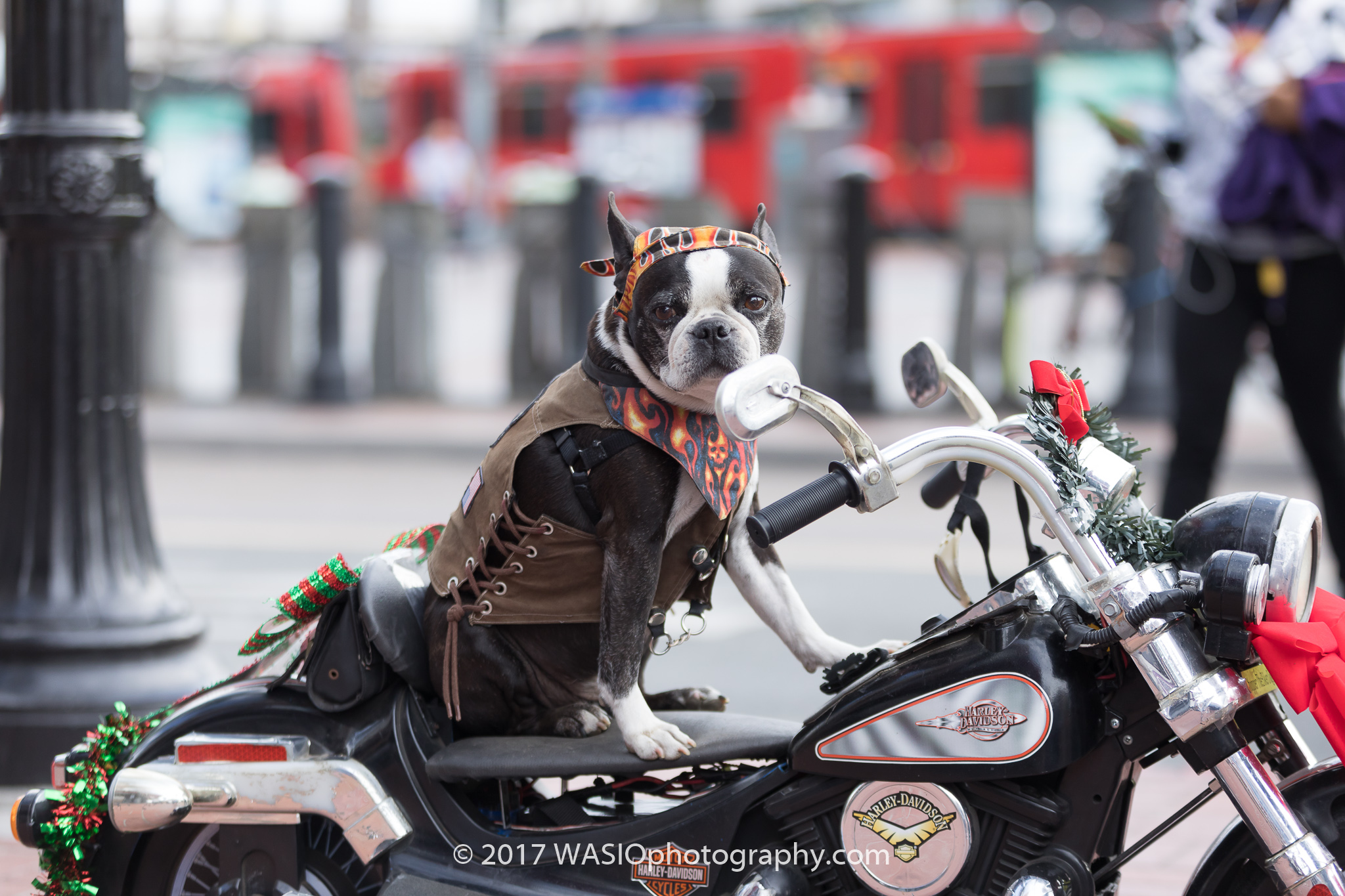 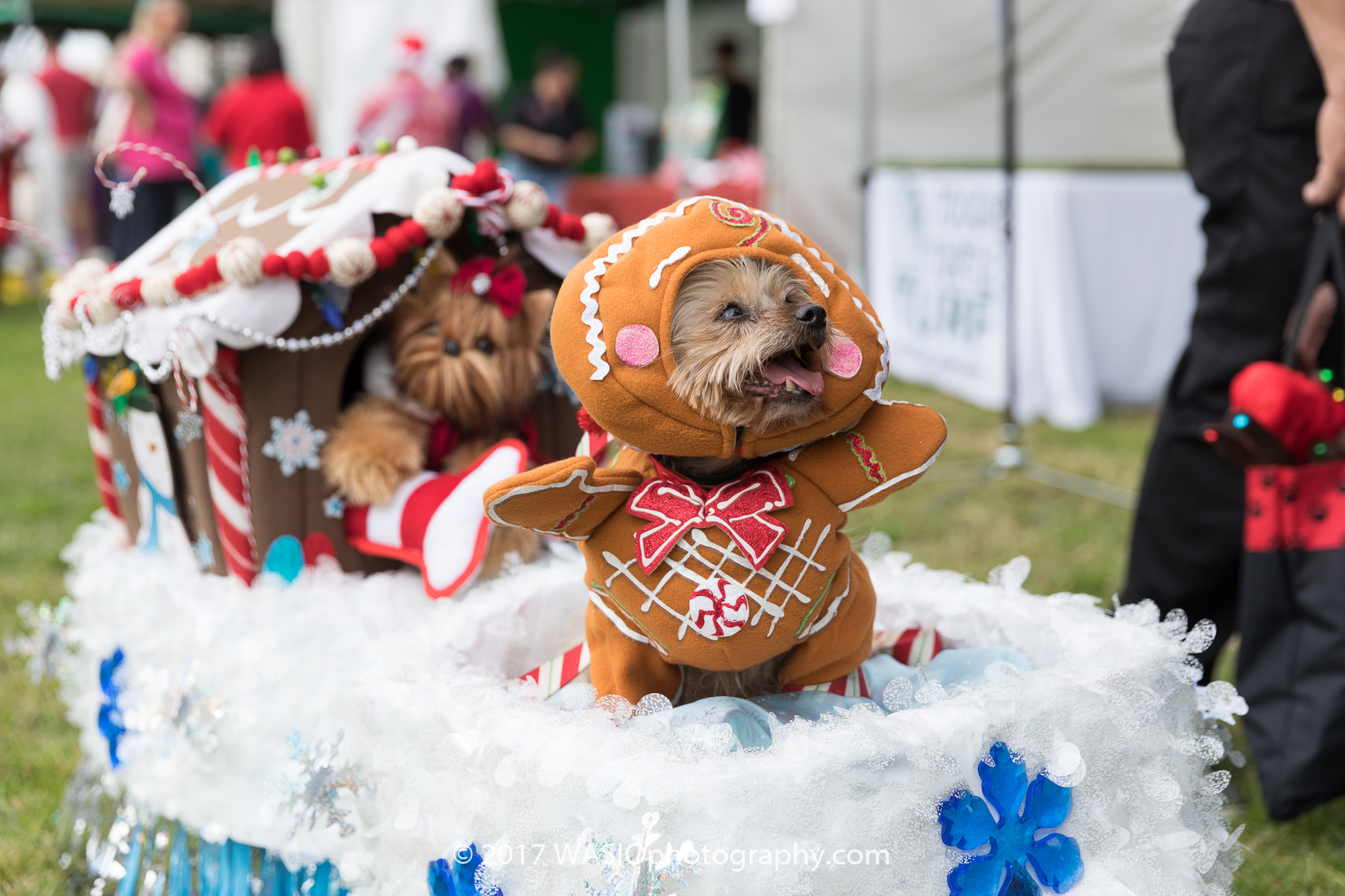 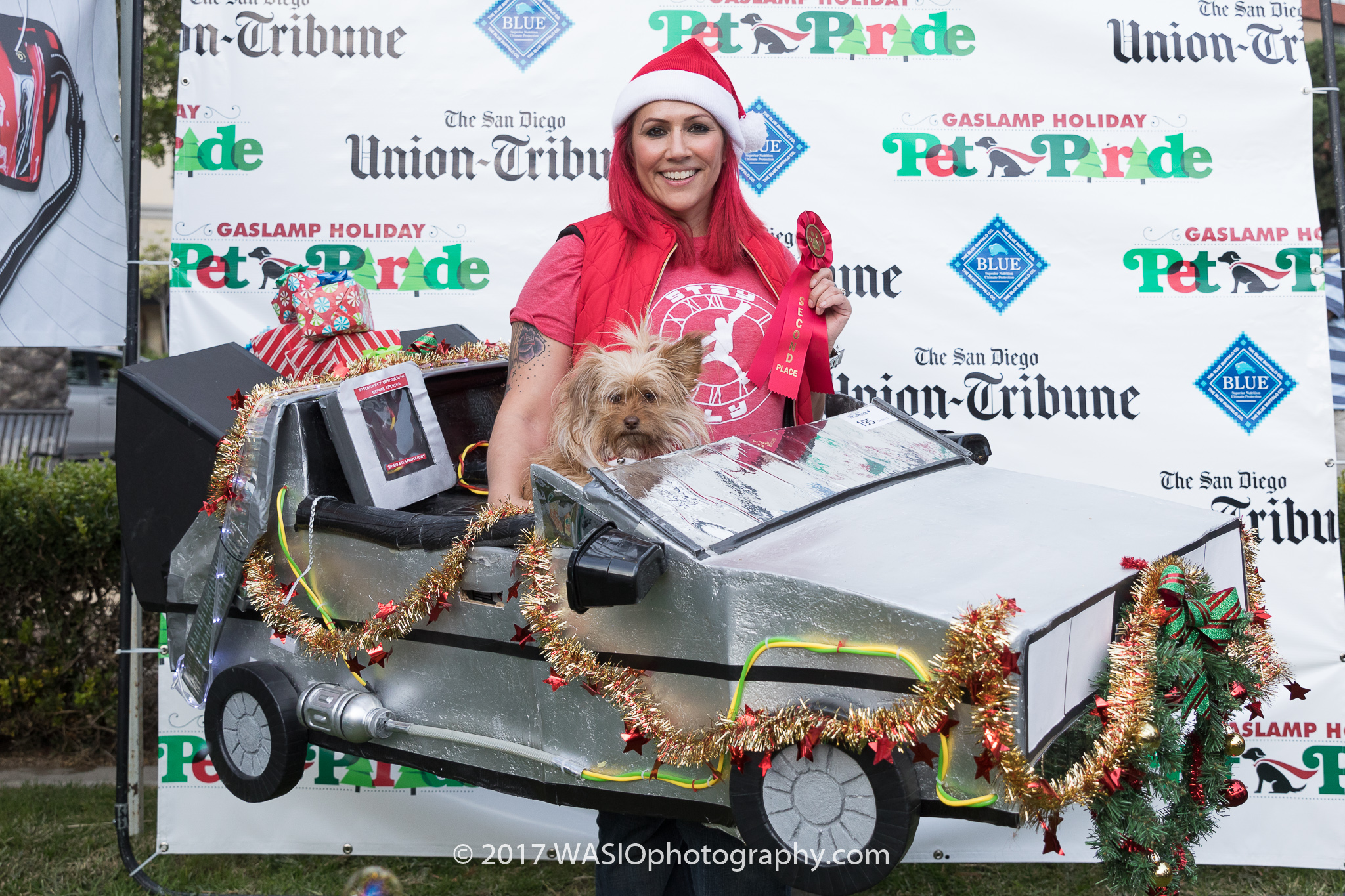 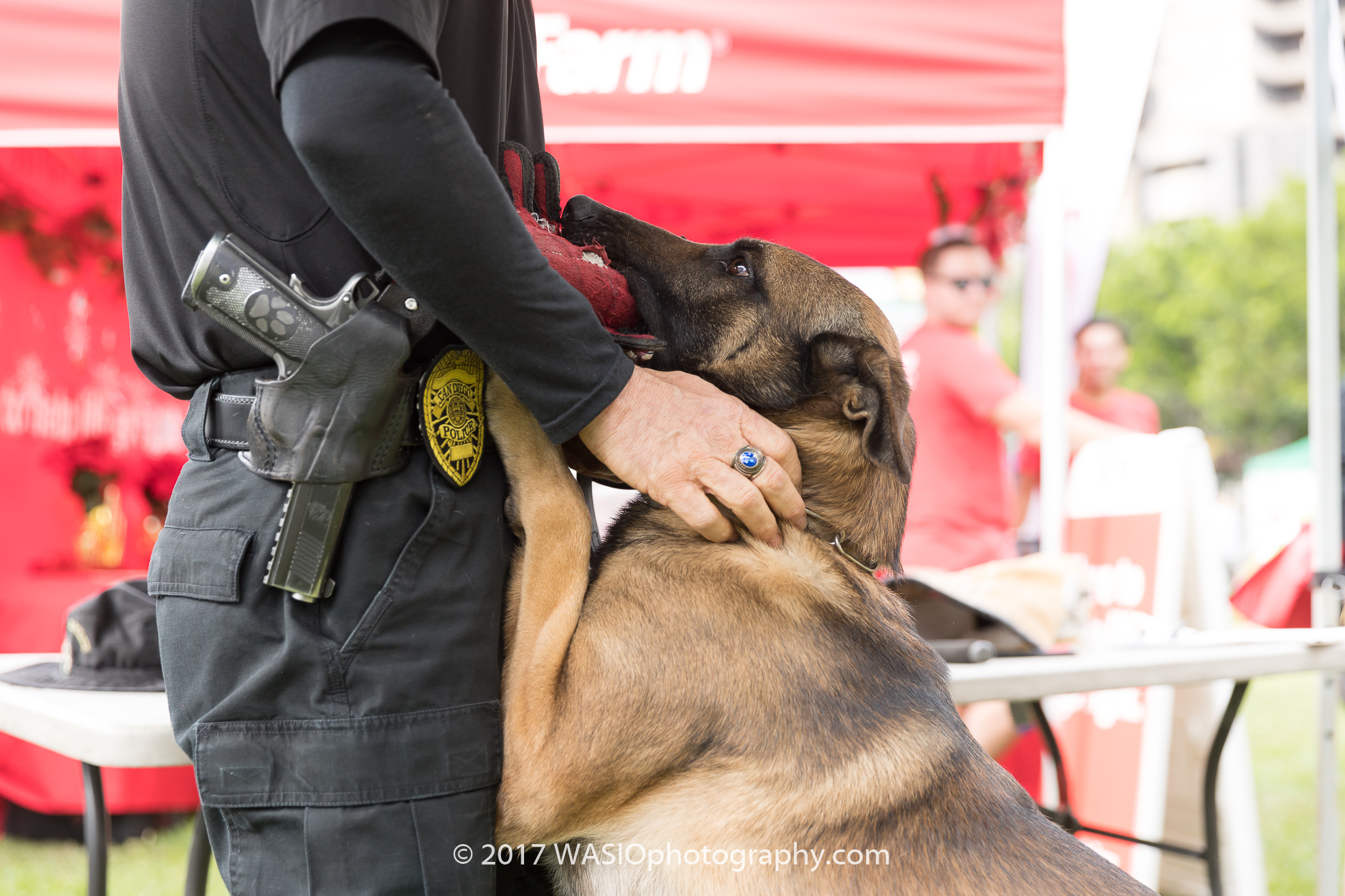 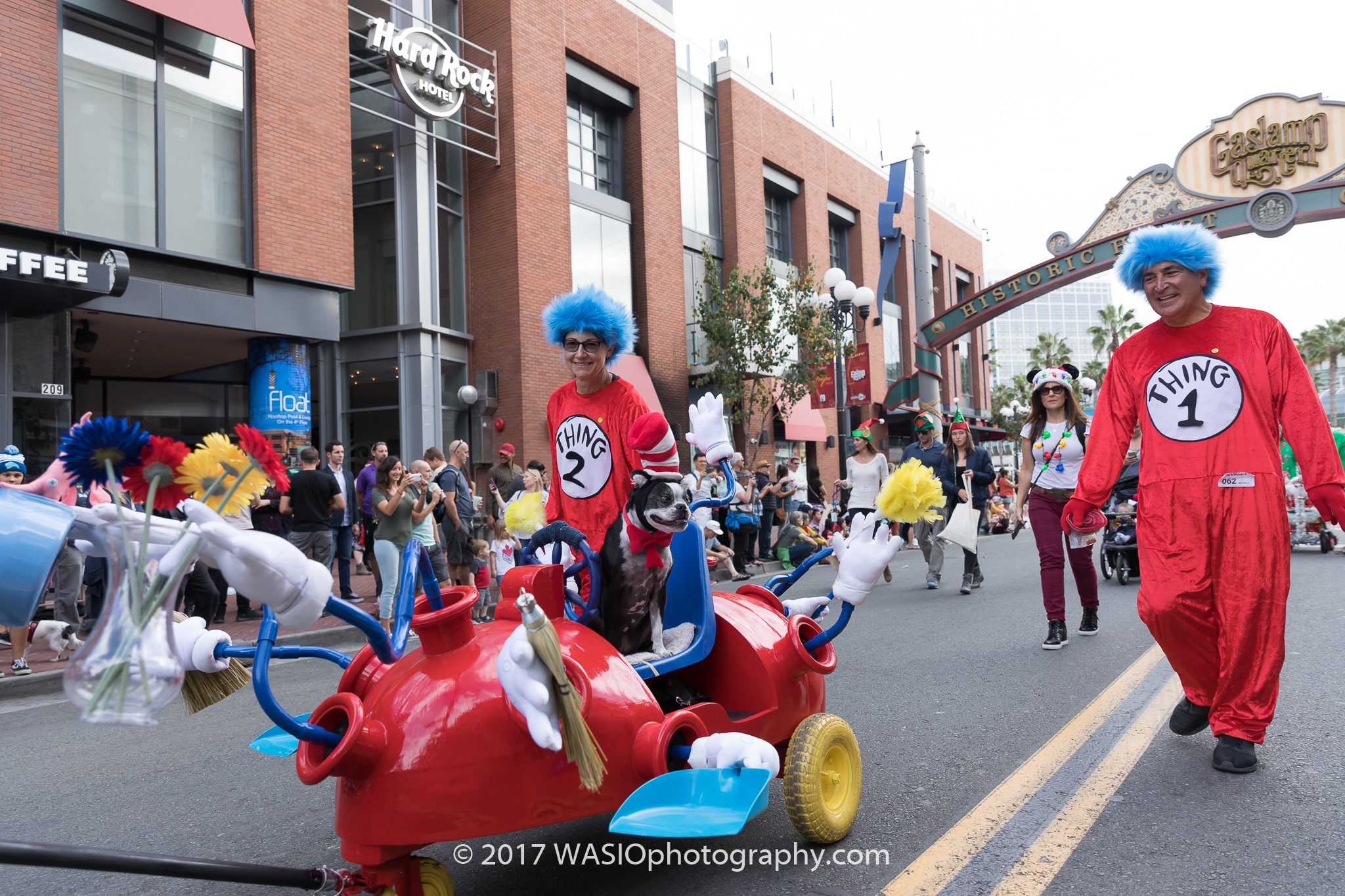 The 10th Annual San Diego Union-Tribune Gaslamp Holiday Pet Parade presented by Blue Buffalo on Sunday, December 10, 2017 was a huge success with over 20 pet expo vendors and over 240 pets dressed in incredible costumes!

The event kicked off at 1:00PM at the MLK Promenade Park (401 K Street) in front of the Hilton San Diego Gaslamp Quarter Hotel. Guests and their pets competed in a costume contest with 9 different categories to win awards sponsored by JustFoodForDogs and Helen Woodward Animal Center. All registered guests received a goodie bag sponsored by the 6th & K Parkade filled with goodies for the pets and the people. All registered pets also received a commemorative bandanna for the 10th anniversary of the Pet Parade. The bandanna along with Rabbitville t-shirts and other goods were also available for purchase. This year’s pet expo featured live music by the George Farres Band, and a dance performance by Mini Shock from the Culture Shock Dance Center. Attendees had the chance to enter a giveaway to win some awesome prizes if they visited all 12 pet vendors and collected a stamp from each in their event program. Guests were also able to take some fun holiday photos at the photo booth sponsored by Downtown Ace Hardware. 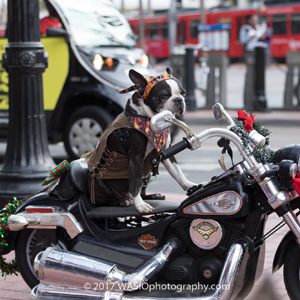 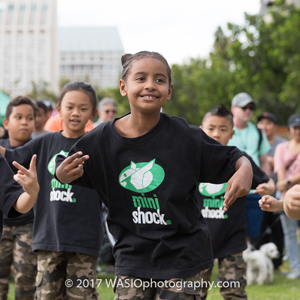 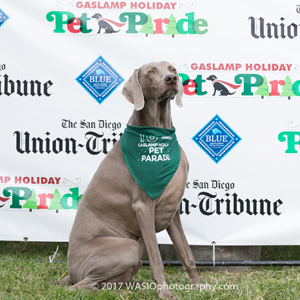 This year, we awarded the 2nd Annual Greyfrairs Bobby Award to Chopper the Biker Dog and his handler Mark Shaffer. Chopper is an 8 year old therapy dog that rides his own little Harley and spends his time bringing joy and happiness into the lives of people going through difficult times. His owner Mark said that some of “the most memorable experiences would be all the times that Chopper had rode his little Harley into a hospital room, visiting someone who was very ill, near death, and just seeing all the smiles on the faces, as you can just feel the love being shared.” 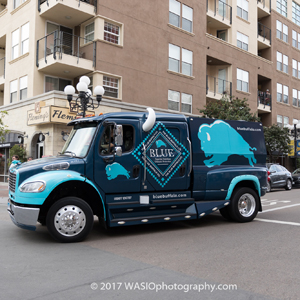 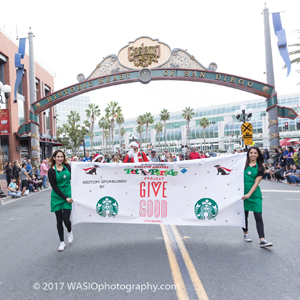 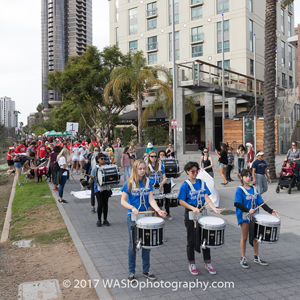 At 3:00PM, the parade kicked off under the Gaslamp Quarter Archway with the Blue Buffalo truck and Grand Marshals Sweet Pea and Sammie, the winners of the 2016 Best in Show, leading the way. To upgrade the experience of the event, the parade was divided into different sections along with official viewing stations sponsored by the San Diego Padres, Jolt’n Joe’s, Bubbles Boutique, Whiskey Girl, Tony’s Pizza, Starbucks Project Give Good, The Cat Cafe, GBOD Hospitality Group, 6th & K Parkade and the Gaslamp Museum at the Davis-Horton House. Starbucks baristas in red and green aprons also gave out $20 Starbucks gift cards along the parade route as part of their Project Give Good campaign. 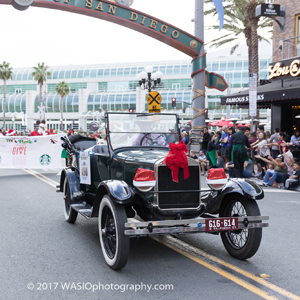 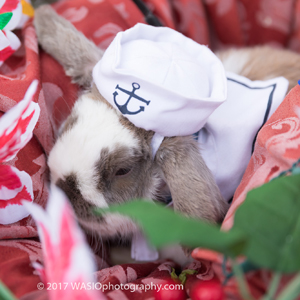 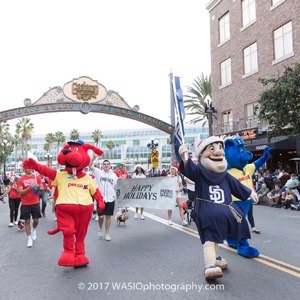 The parade featured special guests Ruff Red and Muse Blue from Petco, San Diego Padres Friar, Helen Woodward Mascot, Miss San Diego 2017 Molly Crawford, and Miss San Diego Outstanding Teen 2017 Breann Brown. For the first time ever, we also had vehicles in the parade, the Blue Buffalo truck, a Model T from 1909 paying homage to the 150th Anniversary of the Gaslamp Quarter, and the SDPD K-9 Unit vehicle. A majority of the 240 pets were dogs, but viewers also saw other pets such as cats, rabbits, a hedgehog, a miniature pig, and a bearded dragon. 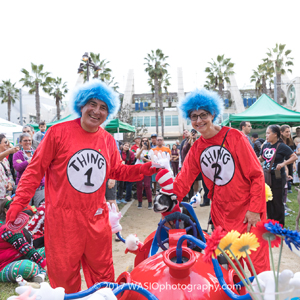 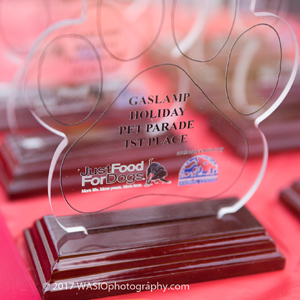 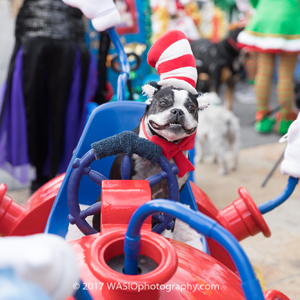 After the parade ended, attendees came back to the Pet Expo for the announcement of the winners of the 9 costume contest categories. It was a very difficult time for the judges to choose who wins an award with so many adorable pets in amazing costumes. In the end, the First Place for Best in Show went to Lucy with handler George Pisano, whose family all dressed in amazing Dr. Seuss themed costumes. Can’t wait to see what they have in store as the Grand Marshal for the 11th Annual Pet Parade in 2018!

Like every year, this was an incredible event gearing up everyone and their pets for the holiday season. We hope all the attendees had a great time and if you missed out this year, make sure to come out next year! Save the date for the 11th Annual Gaslamp Holiday Pet Parade to take place on Sunday, December 9th, 2018!

Congratulations to Our 2017 Winners: