Baseball season is BACK! Spring Training is officially over and Opening Day is fast approaching! The season kicks off with the San Diego Padres going against the Milwaukee Brewers on Thursday, March 29th with left-handed pitcher Clayton Richard taking the mound for his 2018 debut!

First pitch is scheduled for 1:10 PM and every fan in attendance will receive a Padres Opening Day Hat presented by Sycuan Casino. Thursday’s pregame ceremony will feature all the pageantry of Opening Day, including a presentation by the United States Navy Parachute Team known as the “Leap Frogs” and the unfurling of the Holiday Bowl Big Flag, held by sailors from Navy Region Southwest. The Ceremonial Bell will be rung by United States Marine Corps Captain James Henning and the National Anthem will be performed by Jackie Foster, a native of San Diego and a 2018 contestant on NBC’s show The Voice. The Anthem will be followed by a flyover performed by four F-18 Superhornets from the 3rd Marine Aircraft Wing. Former Padres closer and Class of 2018 Baseball Hall of Fame inductee Trevor Hoffman will throw the Ceremonial First Pitch. In addition, Petty Officer First Class Yarrick Sharod Conner of the U.S. Navy will perform God Bless America prior to the 7th inning stretch.

Game two of the Opening Series presented by Sycuan Casino will feature the first Party in the Park presented by Southwest Airlines of the 2018 season as the Padres face the Brewers at 7:10 p.m. Party in the Park is a big pregame happy hour in Park at the Park from 4:30-7:00 p.m. featuring $5 drink specials and live entertainment. Friday’s Party in the Park theme will be WineFest, featuring red and white wines from local and regional wineries and providing fans the opportunity to purchase a theme game ticket package including a Padres-themed wine stopper. First Responder Opening Day will also take place on Friday, with Deputy Roland Garza of the San Diego County Sheriff’s Department performing the National Anthem and the family of fallen CAL-Fire firefighter Cory Iverson throwing the Ceremonial First Pitch. The first 15,000 fans in attendance will receive a Padres & Puppies Calendar presented by Petco.

The first Baseball Night in San Diego will take place on Saturday, highlighted by an all-fan giveaway and postgame entertainment. All fans in attendance will receive a Fleece Blanket presented by Sycuan Casino and are encouraged to stick around after the game for a Postgame Laser Show set to Top-40s hits. Infielder Eric Hosmer will be presented with his 2017 Silver Slugger award during Saturday’s pregame ceremony, and seven-year-old Hailey Dawson will throw the Ceremonial First Pitch. Born with Poland Syndrome, Dawson uses a prosthetic hand made by a 3D-printer and will be kicking off her 2018 portion of her “Journey to Thirty First Pitch Tour” at Petco Park. San Diego native and semifinalist on the fifteenth season of FOX’s hit show American Idol Stephany Negrete will perform Saturday’s National Anthem.

Following a rare day off on Easter Sunday, the Padres will conclude their opening homestand with a four-game set against the Colorado Rockies from April 2-5, featuring Taco Tuesday on April 3.

Tickets for all home games can be purchased by visiting www.padres.com, at the Advance Ticket Windows at Petco Park and by phone at 619.795.5555. In addition, fans are encouraged to download the MLB Ballpark app and select the Padres as their favorite team to access their digital tickets throughout the 2018 season. 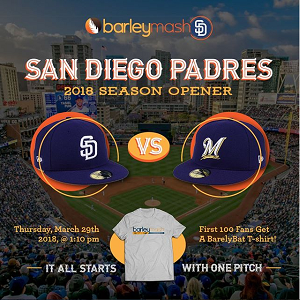 Play Ball! Join us at barleymash for the San Diego Padres Opening Day as they take on the Milwaukee Brewers! First pitch is scheduled for 1:10pm at Petco Park. 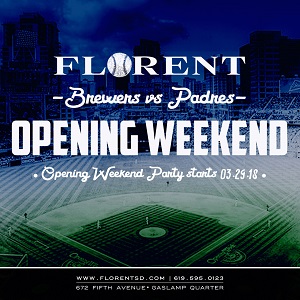 Baseball is BACK baby! The days of Spring Training are behind us, and now it’s time to celebrate the San Diego Padres regular season. The energy will be electric in the Gaslamp Quarter for SD Opening Day/Weekend, starting Thursday March 29th. We’ll be celebrating at Florent Restaurant & Lounge before, during and after the game!

Every San Diego Padres game we will be serving $5 Mission Brewery beers, on top of our regular happy hour, Monday through Friday from 4-6pm. Make it a patio party with our bucket of Cutwater Cocktails Cans (6 for $30)! Executive Chef Abe Botello has plenty of delicious shareable starters before the games, including ‘Loaded Potato Wedges.’

When: Thursday, March 29 and every Padres game 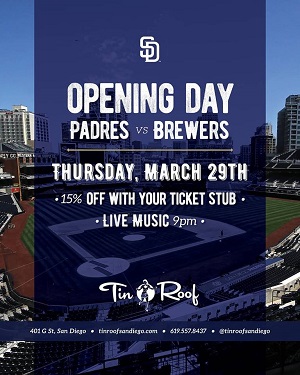 It’s Opening Day! Come watch the Padres take on the Brewers on 30+ TV’s and a giant projector team! 15% off with your ticket stub for every home game! Go Padres

When: Thursday, March 29 3PM and every Padres home game

Opening Weekend at the Tipsy Crow

Celebrate the beginning of the San Diego Padres season with food, drinks, games and BEER in the Gaslamp Quarter! Take 15% off your bill with your Padres game day ticket throughout Opening Weekend at the Tipsy Crow. 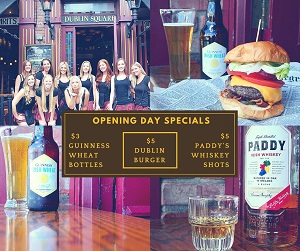 Finally, the return of baseball is upon us!

Get your pregame on at Dublin Square Irish Pub before you walk over to Petco Park for Opening Day! 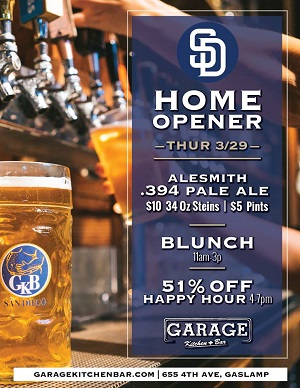 Join us for the San Diego Padres Home Opener!
3 Strikes…and you can still enjoy all our Specials! 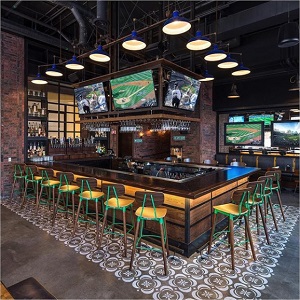 Padres take on the Milwaukee Brewers for their Home Opener at PETCO Park on Thursday, March 29th.

Pre-game with us and enjoy special bites and brews as early as 9AM as we celebrate the San Diego San Diego Padres Home Opener!

We’ll have drink and food specials as well as live music at Nason’s Beer Hall. 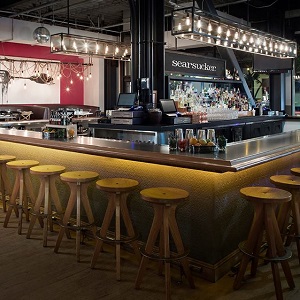 Kick off the San Diego Padres’ 2018 season with ALL DAY HAPPY HOUR in our bar area on Thursday, March 29th.

Get a head start before you head to Petco Park with beers starting at just $5 and hearty happy hour-priced snacks like burgers, shrimp & grits, or our famous duck fat fries. Then come celebrate a Padres win with brand NEW (Old) Fashioned cocktails & more whiskey specialties for $9 through the night.

Didn’t snag tickets this year? We’ll have the game playing on our Bar TVs so you can watch and enjoy happy hour specials with us all Thursday long. 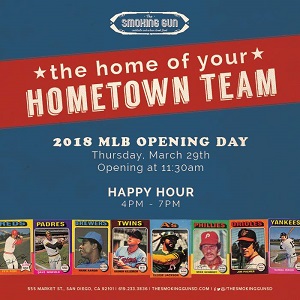 The home of your hometown team! Celebrate the 2018 MLB Opening Day on Thursday, March 29th! We’ll be opening at 11:30AM and happy hour from 4PM-7PM!