John Wismont is one of Southern California’s premier graphic artists. He grew up in the lower east side of Manhattan. He has been a student of fine art, a muralist, developed a children’s television show, a cartoonist, a community art advocate, a Guiness Book of World Records holder, a husband, father, grandfather and now an artist of the 150th public Art Campaign Rabbitville.  John collaborated with District #3 City of San Diego Council Member Chris Ward and completed the distinguished “Christopher the District #3 Rabbit!” 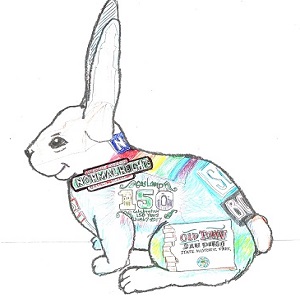 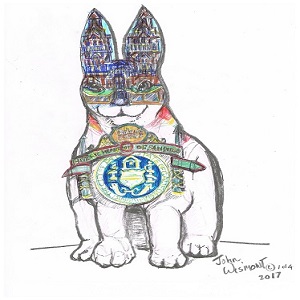 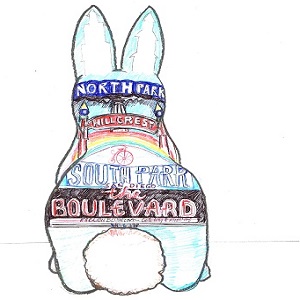 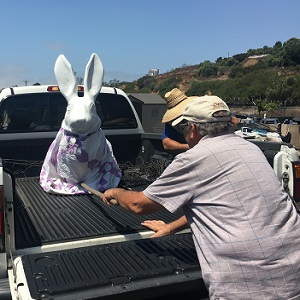 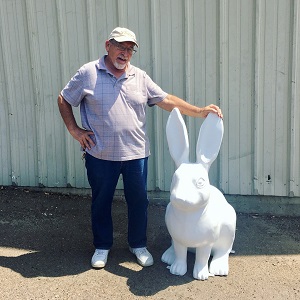 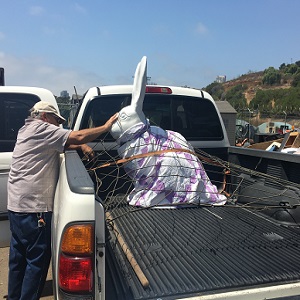 How did you hear about the Rabbitville program?

John: I heard about the Rabbitville public art project from my good friend Pat Brown, who is a well known and loved, local TV personality. She called and said, “you might be interested in this!”

Were you classically trained in college?

John: I attended the High School of Industrial Art in NYU. Studied art at San Bernardino City College, Received an AA From Riverside City College and a BA in Illustration from California State University Long Beach.

What got you into graphic design/ visual art?

John: I Created the Cinema Co-Op, a film club at CSULB which introduced me to a passion for Film and Television. In the interim, I worked at major corporations including Disneyland, Sea World, The San Diego Zoo, Maxwell Labs, and Cubic Corporation to name a few. The Guinness Book of World Records lists John as “The World’s Most Prolific Portrait Painter (1978–1987)” when he worked at Disneyland and produced 45,000 watercolor portraits of visitors.

Where have you exhibited?

John: I have created three major murals. One at a Skating Rink in Riverside, another in a pub in Sabre Springs and the largest covered nine ten foot walls and a street facing room in Georges restaurant in the Louis Bank of Commerce building in the Gaslamp Quarter.

I have also displayed my work in my Gallery/Studio at 6th and Ash, downtown San Diego. Unfortunately, all have met the ravage of time and are either covered over with paneling or demolished. I have organized and exhibited at multiple Art Walks in Old Poway Village, Poway and have been invited to show in Del Mar and Ocean Side. 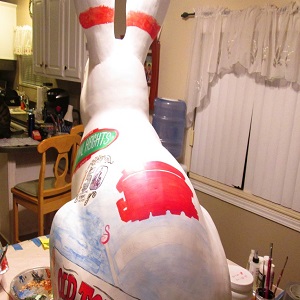 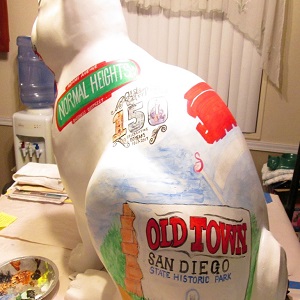 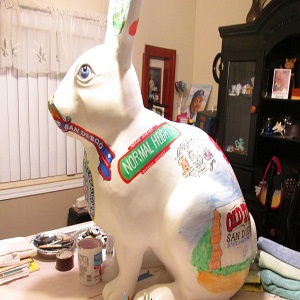 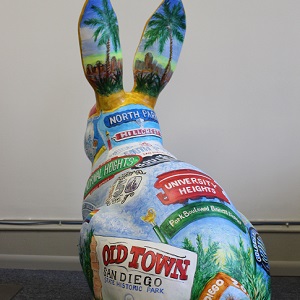 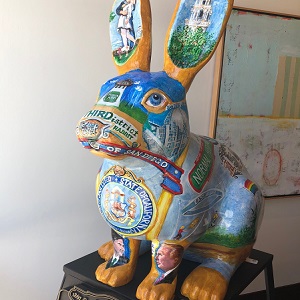 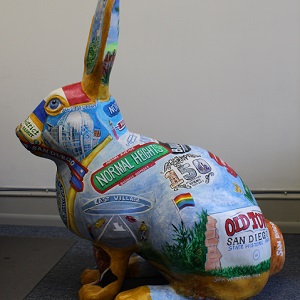 What type of medium is your favorite?

John: Watercolor is my go to for quick portraiture. I enjoy acrylics, for works like the rabbit and murals, but truly my favorite are oils for fine art portraits and nude studies.

John: It is exciting to be working with a leader of the City of San Diego. Chris Ward was descriptive and very clear on his expectations. He still had the flexibility to allow me some artistic license on my interpretation of design elements painted on the rabbit representing the 3rd District. Tyler Renner from Councilman Ward’s office was also very helpful to me with planning the final design.

Tell us about your design?

John: Originally, I submitted my interpretation of design elements, after emails and conversations with the Councilman’s office, we made numerous changes and additions which increased the theme’s interest diversity and coverage.

Have you ever painted a 3 dimensional sculpture before?

Yes, I worked for a company that produced plaster characters for parades and private businesses.

What challenges did you face?

John: when you place designs and paint on 3 dimensional objects, prospective comes into play and to make items and faces look right, you have to distort the object as it wraps around its surface. You make changes until, it is accepted as a correct image. You don’t have to go to such lengths on a flat surface.

How was prepping the sculpture?

John: Not to bad, I didn’t have major faults to fill, the shapes I was working on only had small air pockets, so I lay down a good covering of Gesso were it was needed. It made covering the rabbit with acrylic paint much easier.

Did you name your rabbit?  Other than the District #3 Rabbit?

John: Sure did, I named my rabbit “Christopher.” Fitting for the Councilmember!

What was the most challenging aspect of the project?

John: It did take me a little longer than I thought it would.

Since I am gone from the building I had my last studio in, (see a face in the crowd, 92064magazine.com/aug+sept,) my new studio is at home. The dining room table became unavailable for dinning for about 3 months.

What are you working on now?

John:  I am working on a TV Pilot, “The San Diego Connection with Pat Brown” thesandiegoconnection.com, it is in the post-edit and fundraising stage. We just finished an interview with the Mayor of San Diego, Kevin L Faulconer.