In an effort to establish a town on San Diego’s waterfront, San Franciscan William Heath Davis begins developing land near what is now the foot of Market Street. For his own family, Davis builds a pre-framed lumber “salt box” house, one of the first residences in town. The oldest surviving structure in San Diego’s New Town was actually built on the East Coast and shipped around Cape Horn. After an economic depression causes Davis’ venture to fail, his town becomes known as Rabbitville, for its principal inhabitants. 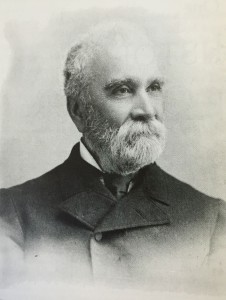 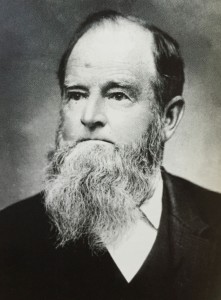 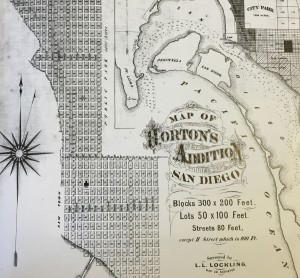 A stout and bearded Alonzo Horton, 54, arrives in San Diego from San Francisco. After looking over Old Town, he decides the best place for the city to develop is down by the waterfront. Determined to build a new downtown on the site of Davis’ failure, Horton purchases 800 acres of land on the waterfront at auction for approximately 33 cents an acre (some historians credit Horton with paying 27 cents an acre). Two years later, he pays $4,000 for a 160-acre parcel needed to sew up the section known as the Horton Addition.
Back to top

Horton spends about $50,000 to build a wharf at the end of 5th Avenue, making this and adjacent streets the backbone of this fast-developing city. On March 24, Horton sells $5,500 worth of commercial and residential lots in one day. His new town begins to boom.
Back to top 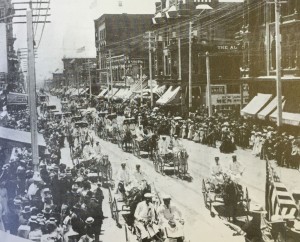 After building Horton Hall at 6th Avenue and F Street — the first public theater with 400 seats for lectures — Horton opens the town’s first bank.
Back to top 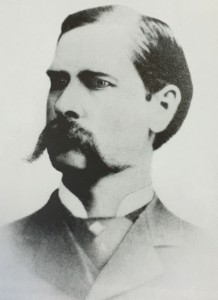 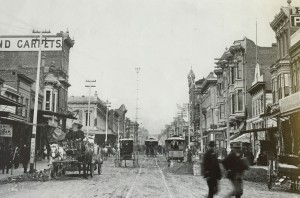 San Diego’s booming prosperity attracts unscrupulous characters seeking to take advantage of the city’s growth. This includes prostitutes and gamblers, including the famous (some would say, infamous) Wyatt Earp, who would go on to run three gambling halls in San Diego. Gradually, San Diego commerce begins moving north of Market Street. The abandoned area to the south becomes a redlight district known as the Stingaree, a name that is said to be derived from the fierce stingray in San Diego Bay. It is said you could be stung as badly in the Stingaree as you could in San Diego Bay.

The original Chinese Mission School opens in rented facilities at the First Presbyterian Church at 8th Avenue and D Street (now Broadway). The Mission becomes a social center and a catalyst for interaction between Caucasians and Asians in San Diego. It also provides an opportunity for Chinese, and later Japanese, immigrants to learn English and receive religious instruction.
Back to top

Feisty, red-haired call girl Ida Bailey takes up residence at a house of ill repute in the Stingaree. Here you can find 350 prostitutes working in 120 bordellos. The Stingaree’s 71 saloons boast names such as the First and Last Chance Saloon, Old Tub of Blood, and Legal Tender.
Back to top 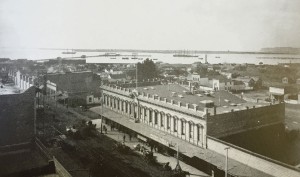 Alonzo Horton makes a deal city fathers can’t refuse: he sells them a valuable half-block of land for $10,000, stipulating that it must remain a park forever. Under the agreement, the city agrees to pay Horton $100 a month with no interest and no down payment. In the event of Horton’s death, the city would acquire the property outright. The city fathers underestimated Horton’s endurance. In April 1903 a spry, 89-year-old Horton cashed the final payment. Today, Horton’s park fronts Horton Plaza and has been renamed Horton Plaza Park. It is currently being revitalized by Civic San Diego, and is expected to re-open in all its grandeur in late 2015.
Back to top

Madame Ida Bailey opens up her own fancy parlor house at 530 4th Avenue called the Canary Cottage. In a pale yellow house set behind a white picket fence, she and her girls are said to “entertain” downtown’s well-groomed gentlemen with fat wallets, including the Mayor and Chief of Police.

Having lost most of his properties through tax sales and foreclosures, Alonzo Horton dies at the Agnew Sanitarium. On his 95th birthday he tells a newspaper reporter, “It’s the most beautiful place in the world to me, and I had rather have the affection and friendly greeting of the people of San Diego than all the rulers in the world.” Ironically, the same year in San Leandro, California, William Heath Davis also dies financially impoverished.

Influenced by a wave of citizen morality, police raid the Stingaree and arrest 138 prostitutes operating out of sleeping rooms on the upper floors of the district’s buildings. 136 promise to leave the city; two agree to reform their ways. The next morning, however, one changes her mind. The other is found to be insane.

With the red lights of the Stingaree officially turned off, San Diego becomes unpopular as a liberty port for the Navy. 779 men aboard several warships vote for San Francisco as their favorite liberty port. San Diego gets only 17 votes. 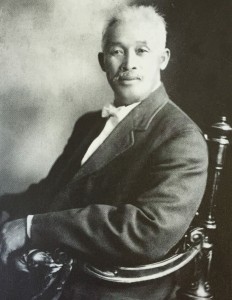 Ah Quin, “Unofficial Mayor” of San Diego’s Chinatown and highly-respected member of the community, comes to a tragic end when he is struck and killed by a motorcycle at 3rd Avenue and J Street. He dies one of the wealthiest Chinese immigrants in Southern California,

The Chinese Benevolent Society is founded to protect the interests of all Chinese citizens in San Diego. The Society is housed in the building at 428 3rd Avenue, in front of which Chinese holidays are traditionally celebrated.

Following World War II, the suburbs outside of Downtown San Diego experience an influx of new residents and businesses, leaving the Gaslamp Quarter as the home of tattoo parlors, seedy bars, pawn shops, and locker clubs. Adult businesses, including peep shows, massage parlors, and adult bookstores, continue to converge on the Gaslamp for the next 20 to 30 years. 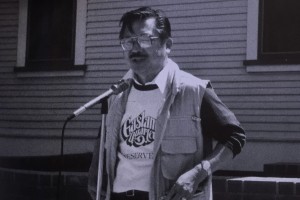 Business and property owners band together, under the leadership of former City Councilmember Tom Hom, to petition the City Council to aid in revitalization of the Gaslamp Quarter. The San Diego City Council provides $100,000 to rehabilitate the Gaslamp Quarter, as well as to develop design guidelines to preserve the district’s historic aesthetic. One of the first buildings to be restored was the Buel-Town Company Building (current home of the Old Spaghetti Factory). Restorations to the Pacific Hotel and Keating Building soon followed.

The Gaslamp Quarter is listed on the National Registrar of Historic Places.

Developers and restoration experts are encouraged to continue restoring the Gaslamp Quarter’s Victorian buildings, leading to one of the most profound joint urban preservation efforts in San Diego history. Business and property owners form a Business Improvement District (BID) named the Gaslamp Quarter Association in an effort to protect and promote the historic district.

The idea of the Gaslamp Quarter Archway on 5th Avenue and L Street is first conceived. 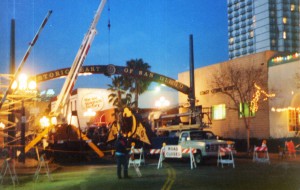 The Gaslamp Quarter Archway is built and installed by Roy Flahive, President, and Cheryl Strukelj, Vice President, or Pacific Sign Construction, Inc., and funded by redevelopment funds overseen by the former Centre City Development Corporation. The original cost of the project was $150,000, and total weight is six tons. 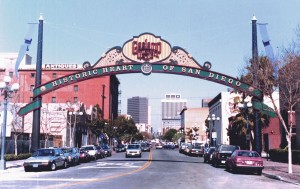 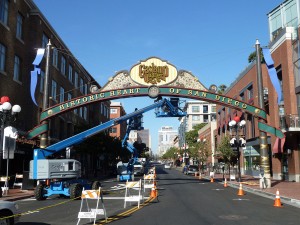 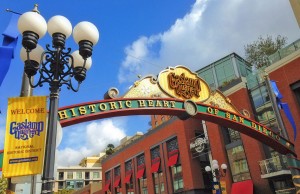 Having gone largely without repair or repainting since 1992, the complete rehabilitation work commences to the Gaslamp Quarter Archway in October 2012 to bring the Gaslamp Quarter Archway back to its pristine appearance and full functionality. The refurbishment is made possible by the Gaslamp Quarter Association in conjunction with the Downtown San Diego Partnership, Clean & Safe Program, managed by Byron Wade, President & CEO of Project Professionals Corporation, with refurbishment work completed by West Coast Signs. West Coast Signs is owned by Patrick Flahive, who happens to be the son of the original builder, Roy Flahive. Refurbishment work includes structural evaluation, re-painting, energy efficient electrical upgrades and replacement of the original incandescent light bults to more efficent and durable neon lighting.

The Gaslamp Quarter has successfully transformed into a premier shopping, dining, and entertainment neighborhood. With over 200 restaurants, bars, nightclubs and lounges, boutiques, art galleries, and shops to peruse, the Gaslamp Quarter has established itself both as the playground of hip, eclectic San Diegans and as an elite urban destination.