Hot Halloween Headliners in the City

San Diego’s Gaslamp Quarter isn’t a stranger to ghost stories, with over 100 historical buildings, several of which have been featured in Haunt World Magazine and the television show, My Ghost Story. With a colorful past filled with gambling halls and a red-light district, there’s no wonder spirits have decided to stick around.

Nowadays, there’s no lack of entertainment when you visit our neighborhood, and if there’s one thing our community knows how to do well, it’s how to throw a party big enough to wake the dead! This year is no exception as Gaslamp venues amp up for the most thrilling Halloween yet featuring A-List headliners, extravagant themes, and exclusive VIP experiences.

If you’d like to spend your Halloween walking the haunted streets of the Gaslamp Quarter, WCKD Village is right up your dark alley. Trey Songz, T-Pain, LA Riots, and Donald Glaude headline this haunted outdoor event on Saturday, October 26, from 6 p.m. to midnight. With three stages, escape rooms, a virtual-reality haunted hospital, lounges, scare experiences, photo opps and more, this street party will be sure to drum up some paranormal activity! Step up your costume game for this one…there’s a $3,000 cash prize for the contest winner! 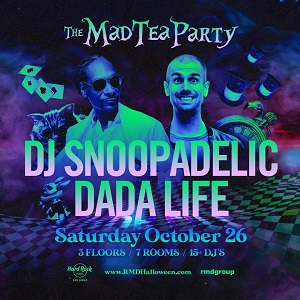 If you’re looking for something a bit more on the crazy side, take a ride down the rabbit hole for Hard Rock Hotel’s Mad Tea Party with headliners Snoop Dogg aka DJ Snoopadelic and DADA LIFE on Saturday, October 26th from 9pm to 2am! One of the biggest indoor Halloween events in Downtown San Diego, this party spans across seven rooms and three floors with different music genres and experiences in each one! As a special VIP twist, you get to choose the room you want to party in! From hip hop to EDM, it’s like choosing your own adventure…and the white rabbit is your host! 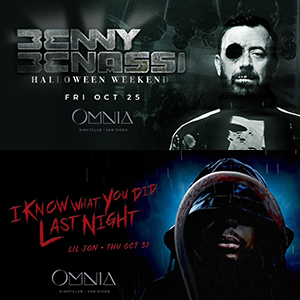 For those of you who just can’t get enough Halloween treats, Omnia is bringing in some talented heavy hitters with headliner Benny Benassi on Friday, October 25th and Lil Jon on Thursday, October 31st. Missing out on entertainment this good would be sure to scare anyone! 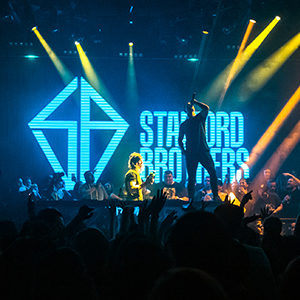 Halloween is sure to bring out the freakiest partiers, and they are all heading to Parq on Saturday, October 26th! This horror story features The Stafford Brothers along with a haunted maze spanning across five rooms with five distinct experiences and the largest HD LED wall this side of the world. The freaks are on their way and they’re ready to put on a show, so consider booking a VIP table to this party! 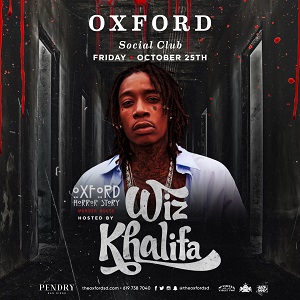 Halloween weekend is about to get crazy as Oxford Social Club welcomes platinum selling and Grammy nominated artist, Wiz Khalifa, to kick off Halloween weekend on Friday, October 25! The fun continues on Saturday, October 26 with Graham Funke. Make sure your Halloween costumes are ready for the sexiest costume contest on Thursday, October 31 for a chance to win a $5,000 prize!

Pick your poison – this incredible Gaslamp Quarter lineup has something for everyone!

For more information on these events and more, visit https://www.gaslamp.org/halloween

← Cafe 21 is Pretty in Pink for Breast Cancer Awareness Month! Treat Yourself to Halloween in the Gaslamp Quarter →
Dine
Play
Stay
Shop
X